I posted a question earlier this week about our IIS8.5/WebDAV setup: IIS8.5 with WebDAV only serves read-only files

I have the basics working, but now having trouble with mapping the WebDAV to a drive letter on a client PC (Windows 10). 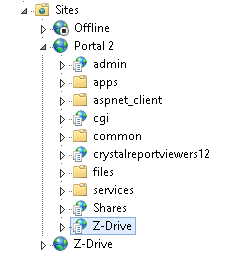 The highlighted "Z-Drive" app points to the Z: drive on the server. Just below that is a separate Site (running on port #8080) that has the exact same setup (same physical path, same app-pool, same WebDAV Authoring Rules).

However, these 2 URLs behave very differently!

I'm willing to use either URL (http://server/Z-Drive or http://server:8080), but one maps to a drive-letter as read-only and the other won't even map. Any suggestions for either problem?

I've found most WebDAV-Problems by enabling and analyzing the IIS Site Logfiles.

We used tworeferences to setup WebDAV - maybe one offers some help for you:

Unfortunately, compared to our other Linux WebDAV-Servers, the Microsoft IIS WebDAV service creates many problems - and Microsoft did not fixed them sincy many years. (E.g. we have problems with File Locking, Filename-Encoding, "long" filenames [we have 2016 and Microsoft could just use the right Win32 API which supports real long filenames], etc.)

Additionally, since many years the Windows WebDAV Client is very annoying: on some clients the WebDAV-Connection just works, while the same net use command just throw errors on other Clients. It also has problems with SSH-Certificates.

Therefore, we use 3rd party Software on the Clients to map WebDAV Drives - they are much more stable, often much faster and they behave identical on all of our Windows Clients.