DSAC.exe crashes every time we try to update a user object. It will crash in every system we try it on including the servers running Active Directory. It happens on Windows 7, Windows 10, and Windows 2012 R2.

I posted the event logs on technet as well but no one has provided any input yet.

The event logs are too long to post here directly.

Any help will be greatly appreciated.

As was already mentioned, this was a bug that was shipped with the 12B (mid-December) 2016 patches.

The issue is fully understood and has been debugged internally, and the fix was scheduled to be released as part of the 2B (mid-February) release cycle, however, as you can read about on the MSRC blog, the updates are being delayed to March.

Technically, the ADAC crash has two causes. One, there is some code in the .NET framework (which ADAC relies upon) that calls GetLastError when it shouldn't. Two, there was a subtle change in kernel-mode GDI window ordering code that caused one of its functions (EnableWindow) to set last error when it shouldn't.

While we wait for the fix, some workarounds that have helped others include:

For reference, here is a screenshot of what the error looks like: 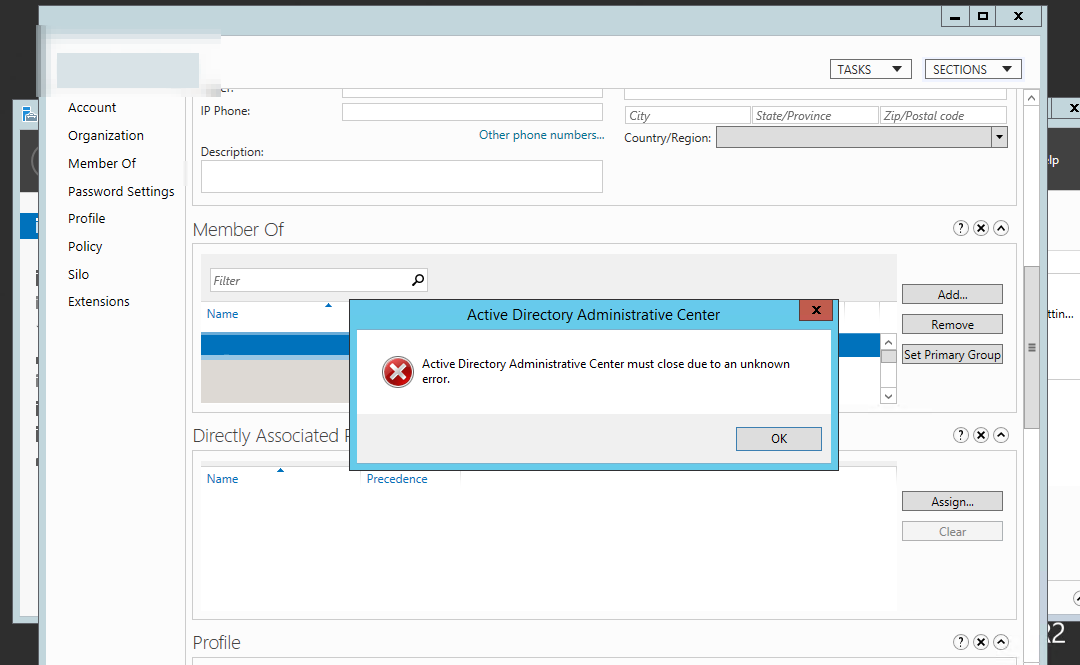 The Windows patches mentioned in the article seem to be the culprit.

I'm not sure what these updates are changing. We created a test box and fully updated it to the latest patches and it is not experiencing the issue. So why are the other systems breaking the Administrative Center?

I had the problem too. I even uninstalled and installed ADAC. It didn't help.

so uninstall them and it will work again.

Maybe this helps someone...

I figured out how to fix it! uninstall update KB3212646 – January, 2017 Security Monthly Quality Rollup for Windows 7. If that alone doesn't fix it for you, check to see if you also have KB3207752, because KB3212646 includes "improvements" from KB3207752. This page will reference any other related updates. https://support.microsoft.com/en-us/help/3212646/january-2017-security-monthly-quality-rollup-for-windows-7-sp1-and-win The work around for disabling "enable desktop composition" allowed me to make changes in active directory administrative center, but uninstalling this update actually fixed the issue.

Not the answer you're looking for? Browse other questions tagged active-directory windows-7 windows-server-2012-r2 windows-10 or ask your own question.