I'm a bit new to configuring Hyper-V so this could be a simple question for someone, but I am in need of some advice.

I have a Hyper-V host server with 128GB RAM, and all of this RAM is being consumed by something. It has 6 VMs running, these are configured to use less than half of the 128GB, so that if another host fails, this can take on their VMs. So all of the RAM being used on my host is not expected - the problem.

One of the VMs running is SQL Server 2014 Standard, and I've found that restarting this VM gives the RAM back to the host, so it appears this is the troublesome machine. The SQL VM has been configured for a fixed 16GB RAM, then I tried dynamic RAM 16GB to 32GB, the problem continued. SQL Server Service itself is configured with a max memory limit which when inside the VM looking at task manager this memory limit is being respected. It is worth adding that this extra memory that is being consumed from the Host OS is not showing in the SQL VM task manager, that shows what I've configured it to use. But like I say restarting the SQL VM does give all this RAM back to the host and it goes from 100% in use down to in the region of 40%. 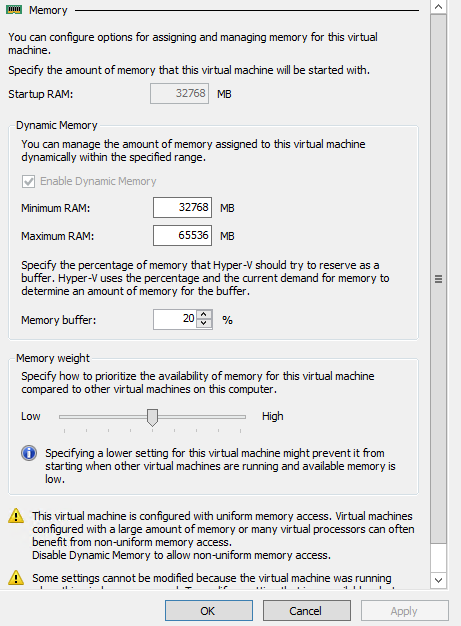 Thanks for any pointers on this.

***Update 19/01/17 12:00 I have used a free Veeam Task Manager for Hyper-V tool which has shown me it is the host using the memory and not the SQL VM I was suspecting. But as mentioned I have found shutting down the SQL VM free's this up. So is there a reason the Host would need so much RAM to manage a SQL VM? We have one host running that is using 7% of the physical machines RAM. This problem host is using 54%! I am planning to shutdown and start-up fresh this host tonight, any thoughts welcome.

The solution for this was a network card driver update that appeared to be released around the same time this issue started. Lots of time and effort but a simple fix eventually. Thanks for your input.

Not the answer you're looking for? Browse other questions tagged sql-server virtual-machines hyper-v or ask your own question.