I am setting up an LXC container on a fresh install of Proxmox 4.4. My network setup is analagous to the one described in this post: network configuration (bridging) proxmox

However, I still cannot access the container from the local network, and the container cannot ping to the outside. The container and the host can both ping each other fine.

and the container's /etc/network/interfaces

I'm really not sure what I'm doing wrong. I thought this was about as simple a network setup as one could have with Proxmox. Can anybody help me?

Full disclosure: I am previewing this as a VM in ESXi 6.5, but it does not seem as if that should matter in this situation.

Edit: I figured out what the problem was and wanted to post it here so it could help if anyone else had the same problem.

In ESXi, promiscuous mode needs to be configured at the vSwitch. This allows nested VMs and containers to use bridging. Please see this article for further information: https://egustafson.github.io/esxi-nested-virtualbox.html

I had the same problem with esxi 6.5. I fixed it this way: in the settings of the virtual switch, the Security tab, we set all values in Accept. And now everything works! 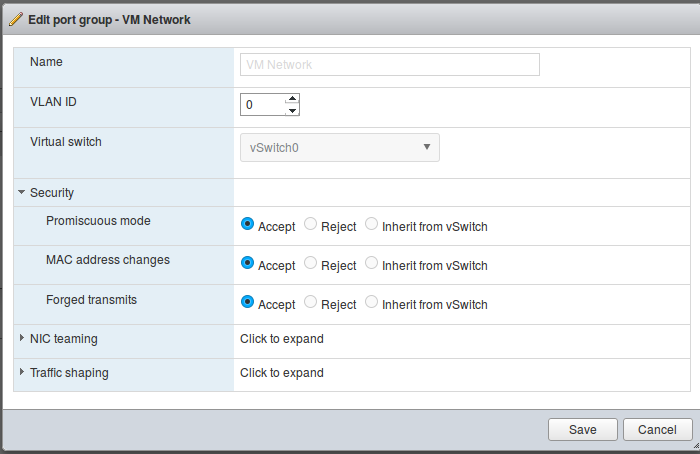 I tested this with Proxmox 5 on ESXi 6.5. You only need to allow MAC address changes. This is like disabling port security on Cisco hardware; this allows you to use more than one MAC address on one port.

Not the answer you're looking for? Browse other questions tagged linux-networking bridge lxc proxmox or ask your own question.