Can switches do VLAN routing? [closed]

Want to improve this question? Add details and clarify the problem by editing this post.

I have been learning about VLANs and I am wondering if switch can be used for communication between two VLANs.

Since switches support trunk links and already know the destination/source (VID) of the frame could they be used to send the frame from one VLAN to the other? 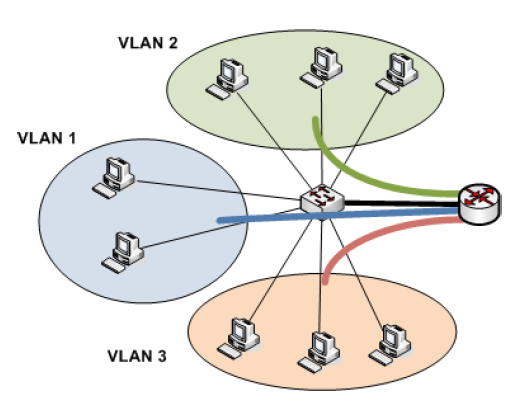 For example in this image above I was wondering why the router is needed if this switch already receives the VID of each VLAN. Why can't switch forward the frame to the targeted VLAN but needs the router to do it thus prolonging the transfer time of the frame to the router and back?

L2 switches cannot do Inter-VLAN routing, since they only take care of L2 network stuff, that is, forward frames between links. If it is a L3 switch, then it can do IP protocol routing between VLANs.

Routing is a layer 3 function, while VLAN only concern Layer 2.

When a computer A want to send data to another host B, using the IP protocol it will first check if B is in the same network as himself (comparing the network portion of its own address and the destination IP address).

So if you don't have a router with an interface in both network you cannot have communication between two hosts in two separates IP networks.

Even if there's some kind of bridges between two VLAN (unusual but possible), or the two hosts are in the same VLAN but have IP address in different IP networks, the communication is not possible without a router, since A will not try to send a frame to B (because it's IP configuration tell it it needs a router).

Now, as other answers pointed out, if your switch is a Layer 3 switch, that means you have in one box both a switch and a router. If configured correctly, the router function of you switch will route between the different VLANs.
The main advantage of Layer 3 switches (opposed to a separate router) is that you can route between different VLANs at full wire speed (I.E. as fast as the switching process).

Other answers here deal with network theory, so I will not comment on that. As for actual network hardware in the real world, which is related to but different from network theory, the answer is yes. You can buy a network switch which can handle VLAN traffic.

A network switch used to be viewed as a layer 2 device, but many switches do more than that these days. Sometimes routers are labeled as a "layer 3 switch." Switches with more than just layer 2 functionality are also sometimes referred to as a "layer 2.5 switch"

Funnily this isn't supported by VLAN switches - you can't configure them to connect, say, VLAN3 on port A to VLAN5 on port B.

You could hack this by using two ports, configure one to have VLAN3 untagged, and the other VLAN5 untagged, and then connect them with a cable. (Didn't try this, but don't see why it shouldn't work.)

If I'm interpreting this correctly, you want a switch that receives a frame with VLAN 5 (for example) to forward it with VLAN 6.

This would be pointless. Instead of doing this you could simply take all your devices that use VLAN 6 and move them to VLAN 5 instead.

Because it's pointless, switch vendors didn't add any way to do it.

Intra-VLAN traffic is forwarded between mac addresses of the VLAN network. For a "frame" to leave that network, it must be forwarded to the mac address of a routing capable device. This can be a switch, firewall, or router. So if a frame from VLAN A wants to reach VLAN B, VLAN A will send the frame to the mac address of the default gateway, VLAN B will do the same. If those gateways are on a switch, then the switch is routing packets between the vlans, same for a router. You may want to use a firewall, however, if you need to control access back and forth between the vlans.

In the modern world: Think of switches as routers with a lot of ports. Think of routers as switches with less ports, but higher availability. Think of firewalls as routers that can support higher layer services, like intrusion detection, antivirus, SSL proxy, application services, NAT, etc.

Not the answer you're looking for? Browse other questions tagged routing switch vlan or ask your own question.

25
Why do people tell me not to use VLANs for security?
0
CISCO 2950 Switch VLAN Acccess Control
0
VLAN on multiple switches?
29
What happens when a consumer switch receives a VLAN-tagged Ethernet frame?
0
vlan tagging between l3 and l2 switches
0
Inter VLAN Routing Issue
0
Connect 3 L2 switches to router