On Office 365 (but essentially any Exchange should have similar problem) there are few groups created:

Requirement is that each of those groups should only accept emails sent to them by internal members (authenticated) and sent from specific server outside of Office 365 that is on Linux.

How to configure it so that it works properly?

I’ve thought configure Group to only receive authenticated messages, setting connectors with that Linux server but since relay will be anonymous those groups will deny those emails. I’ve thought of creating a Group that will hold those 3 groups and create a mail rule. However attempts to create proper mail rule failed because while they allowed members to send emails from “approved” domains by using exception they also blocked emails sent directly to users (thru rule the recipient is a member of… where it seems group membership is checked recursively”). I've played around with multiple rules but I couldn't find anything that played just right. I am missing options like "IF NOT from domain..., sent to group, drop email" for the mail rule and usually had to use exceptions. Which didn't cover my scenario.

What’s the proper/suggested way to do this? 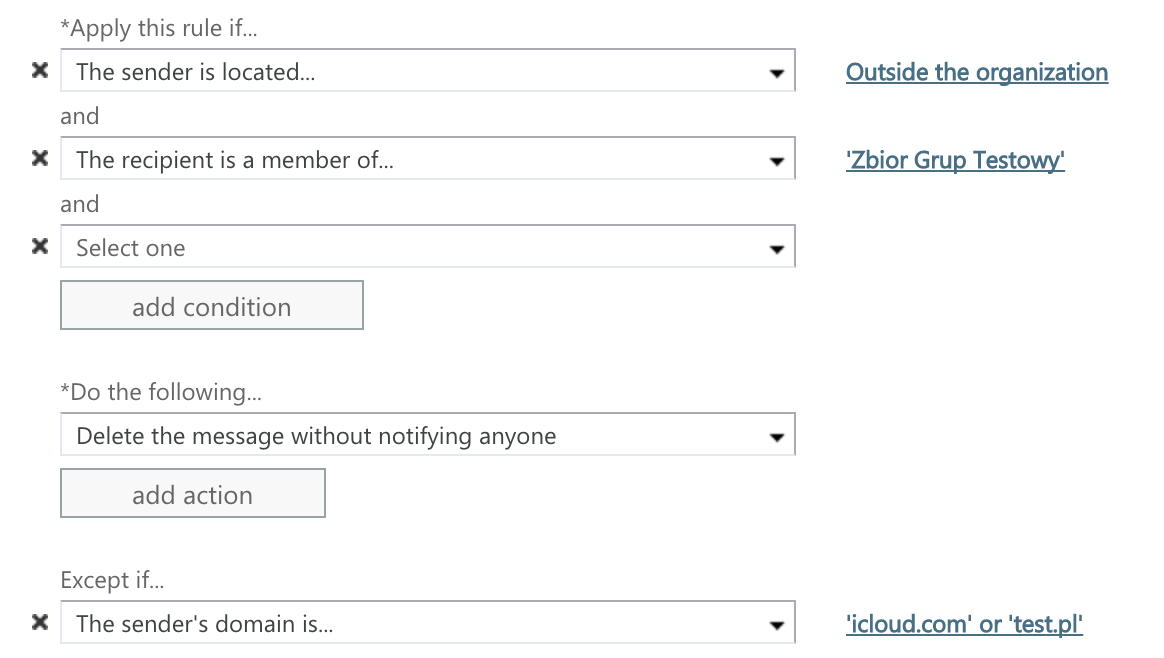 This definitely ensures the "Require Sender Authentication" requirement is met on your Groups.

What you have attempted so far appears to meet Option 3 in the link above.

Not the answer you're looking for? Browse other questions tagged exchange exchange-2013 microsoft-office-365 exchange-2016 or ask your own question.

6
Office 365 routing of internal domain messages
0
Office 365 Mail redirection issue
2
Office 365 alias does not accept external emails
0
Exchange 2010 HUB Transport Rule not working
0
Server-side Outlook Out of Office Message only To a contacts group or not to a different group
2
How to mail-enable an existing Azure AD security group?
0
How to Convert Security Group to o365 Group?
1
Can an owner of a group in Outlook 365 delete the email history of that group?