Prevent DHCPDISCOVER on other interfaces

On a Debian multihomed server, both interfaces eth0, eth1 are configured for DHCP. When the second interface (eth1) is bought up after eth0 is active, the DHCP client is sending out DHCPDISCOVER packets on both eth0 and eth1 interfaces. How can I prevent this behaviour and force DHCP to only broadcast on its interface?

Note, the "invalid argument" error is because I am experimenting with post-up/down settings 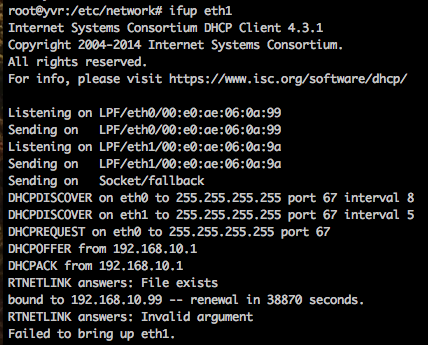 If you will always be bringing eth1 up manually at some point after anything automatic has happened during boot or network restart, then you could set the method on teh device to manual

And then instead of ifup eth1 do dhclient -v eth1

Not the answer you're looking for? Browse other questions tagged debian dhcp or ask your own question.