How to determine which process is sending UDP packets once per hour?

I was doing a packet capture as part of a development project and saw some odd traffic coming from my machine in the capture file.

I'm concerned the machine could potentially have malware, but malware scans report nothing.

I started a packet capture filtering out only the NAT-PMP packets in question, and the packets are going out almost every hour, but not reliably every hour.

Wireshark itself can't tell me which process is sending the packets. TCPView could work, but I'd have to make sure I'm at the machine almost exactly when the packets go out, because the list doesn't retain closed or inactive connections for very long. With the packets not reliably going out every single hour, that's a frustrating proposition.

Suggestions on how to figure out which process is sending these packets at a wide interval?

You can easily accomplish this with SysInternals' Process Monitor. Run it as Administrator, then configure it as follows: 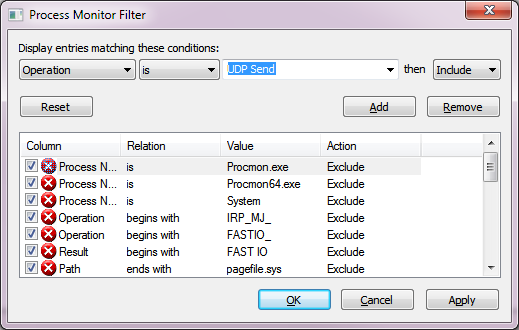 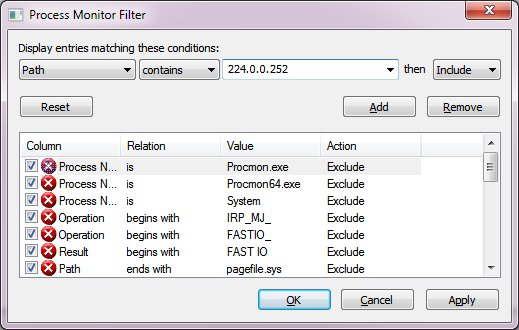 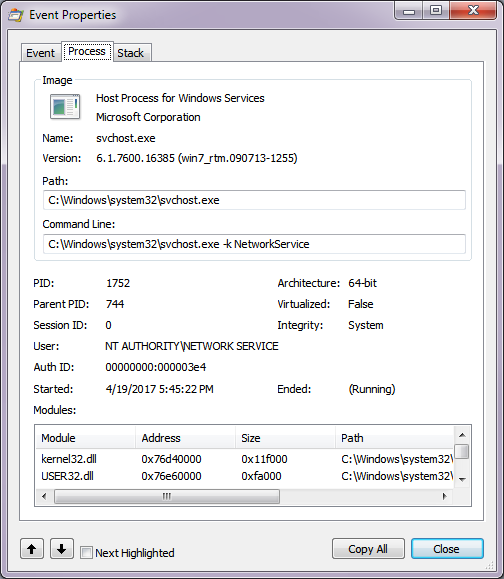 You can enable wire shark to show source and destination ports.

filter by UDP and find what process is bound to the port.

You can use netstat -b to list all ports with bound processes.

Not the answer you're looking for? Browse other questions tagged windows networking udp packet-capture or ask your own question.

2
pfSense: Possible to traffic capture the actual WAN port?
1
tshark (wireshark) to pinpoint connect reset / retransmitted issue
1
TCP stops sending weirdly
2
VPN packet capture on ASA5505
0
multicast streaming, too much network traffic?
2
Is it possible to capture packets of a Router?
4
Massive packet duplication
0
Why are duplicated UDP packets being dropped 10 out of 11 times by this iptables configuration?