I have scheduled a task to be run at system startup. But its not working. When I run the task manually, it is working. Below are the screenshots of the settings. 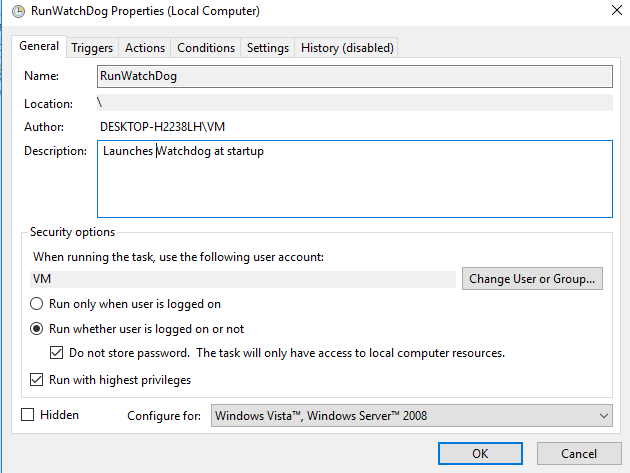 What have I done wrong here? This task executes a bat file that launches a process. Btw, the result of last execution is shown as successful though.

I struggled a while with the same problem. In my case, the problem was the setting "Start the task only if the computer is on AC power".

You are executing this Task with "VM" user privileges. Does "VM" account have "Run as a batch Job" rights?

Now the task executes correctly every time I restart my computers.

Why don't you run this batch file as a windows service? Is there any particular reason? FYI: http://nssm.cc/usage

Your program isn't a background script or a service. It is a GUI program that should be run as a user in graphical environment. Therefore you should not launch it as a scheduled task on startup but on user login.

As the program is in your own development, you could revise its design: should it have a background service doing the background operations and separated GUI for configuration / monitoring?

I also have problems with Win 10 task scheduler, and for some reason I have same behaviour as you. Task is marked as successfully executed but the program/script does not run.

In order to solve this, at least it works for me, try placing a shortcut of the script as a startup program in %APPDATA%\Microsoft\Windows\Start Menu\Programs\Startup.

You can also make this shortcut be runned with highest privileges (Admin). I've found this to work better than task scheduler, at least for my software/scripts. Some of them run with GUI and some without GUI, but both of them run fine under Startup folder.

PD: %APPDATA% is an system variable, the full path should look like the following:

Is fast boot enabled in the BIOS? Win10 uses restart in a similar fashion to sleep mode if fast boot is enabled, so is not a true 'restart'.

I just had this issue while setting up UI tests on Jenkins slave machine, but with one difference - I'm using the "Run only when user is logged on", so not sure if it makes a difference. I fixed the issue with following steps:

Taken from this article.

Not the answer you're looking for? Browse other questions tagged scheduled-task windows-10 task-scheduler startup scheduler or ask your own question.

48
Process runs slower as a scheduled task than it does interactively
2
wbadmin doesn't run as scheduled task
2
Scheduled task does not run on WIndows 2003 server on VMWare unattened, runs fine otherwise
0
Problem with scheduled task - portions of script do not execute
34
Windows Task Scheduler does not start task at next run time