How can I buy end-user bandwidth for my customers? [closed]

Ask Question
Asked 3 years ago
Active 2 years, 6 months ago
Viewed 7k times
27
Closed. This question is off-topic. It is not currently accepting answers.

I sell a product to customers, and as part of this product I have a website where customers can upload data for processing. The data is of considerable size (gigabytes).

I am looking to buy extra bandwidth for my customers, and to make the arrangement with their ISPs myself so that the experience is seamless to the end users. Many of my customers are on university or corporate networks where they would be unable to make the arrangement themselves even if they wanted to. The extra bandwidth would apply only to connections to my website, not to the customer's other connections.

Basically I am looking for this sort of arrangement: 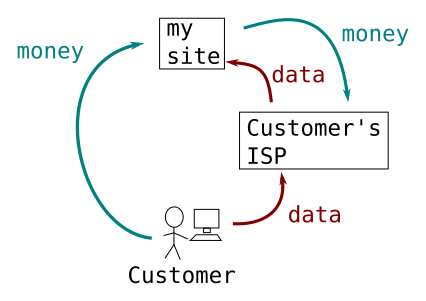 Is this sort of thing possible?

Edit: Now that the United States has ended net neutrality, is it possible?

It sounds like in effect you want to pay a users ISP to zero-rate traffic to your site, similar how to some cell carriers allow you to stream video from certain websites without impacting your allocation. If you are a major company like Google or Netflix then this has a ghost of a chance of being feasible, otherwise most companies will not talk to you -- its not worth their time to implement the necessary infrastructure for such a small user base.

The corporate or school clients (I am thinking such as a hotel) may very well not have the capacity to scale their bandwidth in an economic way either. They may have the equivalent of a T1 (hence the connection metering), and the only way to go above that is to buy another entire T1. You aren't going to want to pay for that. If your service is profitable enough to make those kind of deals anyway then your clients would be able to afford commercial tier ISPs anyway and won't need you to do so.

If you approached someplace that could meaningfully scale their bandwidth, they'd still want you to foot the bill for the whole years worth of extra bandwidth since they likely have a yearly contract. Anything government or education related (state schools) would have its own entire issues with procuring extra capacity at your behest.

So, if you have very very deep pockets and an army of lawyers and marketers then you might make some progress, but the model just does not scale and I can't fathom how it would be profitable.

For all intents and purposes, no, this is not possible. Even if it were, the technical and contractual logistics required would cripple your business.

Think through this a bit more: Joe user at University signs up for your service. You then approach one of the University's many providers (which one? How might you know what provider Joe user's traffic egresses out of today, let alone tomorrow when things change). So then you have to make agreements with all of their providers. But then you realize that somehow you need to make an addendum to a contract that was made between the provider and the university, without the university's involvement?!? How exactly do you expect that to work? Oh and then, you realize that Joe user's traffic is likely subject to heavy traffic shaping and that any "extra bandwidth" you could procure (if such a thing were even possible) would be pointless due to traffic shaping rules. Even if traffic shaping rules weren't in play, why do you think traffic to/from your site should get special treatment? How do you thing the network people would feel about that?

See? It's impossible for many, many reasons. Honestly, though, I think you're proposing a solution for a non-existent problem. If your customers are on university or corporate networks, there is likely plenty of bandwidth to spare. A few gigabytes is not that much data, and is lost in the noise when viewed with all of the other traffic on the network.

Depending on the frequency at which you exchange data with the customer, it could be cheaper, faster, and more efficient to mail them a storage drive, then pay to have it overnighted back to you when populated with data. This would cost a tiny fraction of what your agreement plan would cost long-term. Turnaround time may be nearly the same if lots of data is involved and their upload speed is low, as most asymmetric connections provided by most ISPs tend to be.

No it is not possible because it is likely to be illegal in the country you are operating in. The proviso of course being that if you are in the US, the FCC/Trump are currently in the process removing the laws that protect users from the evils of such an arrangement.

Hi Ryan, I think you are asking the wrong question. Of course what you are asking is technically possible. In fact arrangements have been made in the past to that effect.

The better questions is "Is this arrangement LEGAL and if not, why not".

You question falls under the realm of Net Neutrality, which is where all ISPs treat all data the same. You want this because the world you imagine, taken to the logical conclusion would mean that you cannot access any website (at any appreciable speed) without that website forking lots of money to your ISP, assuming the ISP accepts their money.

Take a theoretical case study. Bob lives in a rural area which is only served by a fictional ISP. We shall call this Cast-Com. Bob likes his TV streaming and has signed up for a third party TV streaming service, we shall call WebFlicks.

Of course this is all theoretical and has never happened before...

If you think you'll have sufficient traffic (think at a minimum several PBs worth month reasonably sustained), you could look at a "private peering" solution with their ISP (so traffic would go from your client, to their ISP and then directly to your datacenter). It'll cost a lot to setup (the cheapest option would be if you and the ISP both have facilities in the same internet exchange: most expensive would be fibre cables being routed between them and you), but they'll get savings as they wouldn't then have to pay to go out to the general internet before reaching you.

If traffic levels get even higher, you could then look at then running connections directly to your client with weighting on their BGP compatible router so traffic destined for you goes over the direct link.

I used to work for a major UK educational SaaS provider and we were looking at a private peering solution with JANET (who is the "main" ISP serving UK schools and universities) so clients could access our service in a similar way to you, but the cost/benefit ratio came nowhere near reasonable for our several hundred TBs per month.

If they are spending days, and not hours uploading data, shipping the data directly to your data center is probably the fastest. UPS shipping a box of TB SSD's is a much higher bandwidth then most internet connections. You can also pay for shipping for your customers, allowing you to pay more for higher speeds.

I am sure this is not the type of response you expected, but it is quite common when uploading data into the cloud for new companies to mail disc drives in to be loaded.

I've been working in Telecoms for 10 years and my experience says this would be too expensive to implement in the operator's systems. It's not worth expanding on why, but a lot of answers above have touched on the major technical problems. However, if you are prepared to pay, you can utilise a load balancing solution to your problem. Either with the use of additional LTE/WiMax modems or with a combination of multiple traditional ADSL connections. Or both.

Your best option is to create a program or use an existing solution for your customers to compress their files and then send them to your server to be processed.

No, not without becoming an ISP and hooking your own lines up to customer premises'.

Not the answer you're looking for? Browse other questions tagged internet bandwidth isp or ask your own question.