How to describe VMware performance requirements for our application to a VMware admin?

Often, an installation of our on-site, debian-stable based application runs in a virtual machine - typically in VMware ESXi. In the general case we do not have visibility into or influence over their virtualization environment and do not have access to e.g. the VMware vCenter client or equivalent. I focus on VMware here, because that by far is the most common we see.

We have seen time and again, that when there are performance problems, the problem isn't with our application, but with the virtualization environment. E.g. another virtual machine uses tons of CPU, memory or the SAN on which the disks are actually stored get heavy use by something other than our application. We currently have no way to prove or disprove that.

Theoretically it could also be possible that sometimes our application is slow... ;-)

How does one determine the root cause of our performance problems: Virtual environment or our application?

There are typically 3 areas for performance problems CPU, Memory and DISK I/O.

In e.g. VMware the administrator can specify Reservation and Limit, expressed in MHz, but is e.g. 512MHz on one ESX host exactly the same as 512MHz on another ESX host, possibly in a completely different ESX cluster?

And how does one measure whether we actually get that? While our application is running, we can perhaps see that we are at 212% CPU utilization on 4 CPUs. Is that because our application is doing a lot or because another VM on the same host is running a CPU intensive task and using all the CPU?

If we ask for e.g. 16GB RAM, that is often configured, but because of ballooning, we actually only get 4GB, and surprise, our application performs poorly.

One can ask the VMware tools about the current ballooning, but we've find that it often lies (or is inaccurate at least). We've seen examples where the OS thinks there is 16GB total RAM, the sum of the resident memory (RSS) of all processes is 4GB RAM, but there is only 2GB RAM free, even when VMware tools tells us there is 0 ballooning :-(

Also, just adding RSS together isn't valid, as there could easily be shared RAM, e.g. copy-on-write memory so 512MB + 512MB doesn't necessarily mean 1GB but could mean something less. So one can't simply subtract RSS from all processes to get a measure for how much RAM should be free and thereby detect ballooning reliably. One can detect some cases of ballooning, but there are other cases where ballooning is in effect, but not detectable by this method.

I guess we could graph over time the number of disk reads and writes, the number of bytes read and written, and the IO wait %. But will that give us an accurate picture of disk I/O? I imagine that if there is a bitcoin miner running in another VM using all the CPU, our IO wait % will go up, even if the underlying SAN gives exactly the same performance, simply because our CPU resources go down, and hence IO wait (which is measured in %) goes up.

So in summary, what language can we use to describe to e.g. a VMware admin, what performance we need, in a portable and measurable way?

All of these things will work against you.

You should determine the real requirements of your solution. Being able to accurately state that your appliance requires: 2 vCPU, 8GB RAM and 500 IOPs storage performance would go a long way to someone like me.

The other approach is to observe a healthy or ideal environment and extrapolate the metrics from there.

You've described problems with certain deployments. What were the issues and bottlenecks?

An example of a right-sized VM:

An Exchange server for a 300-user organization. 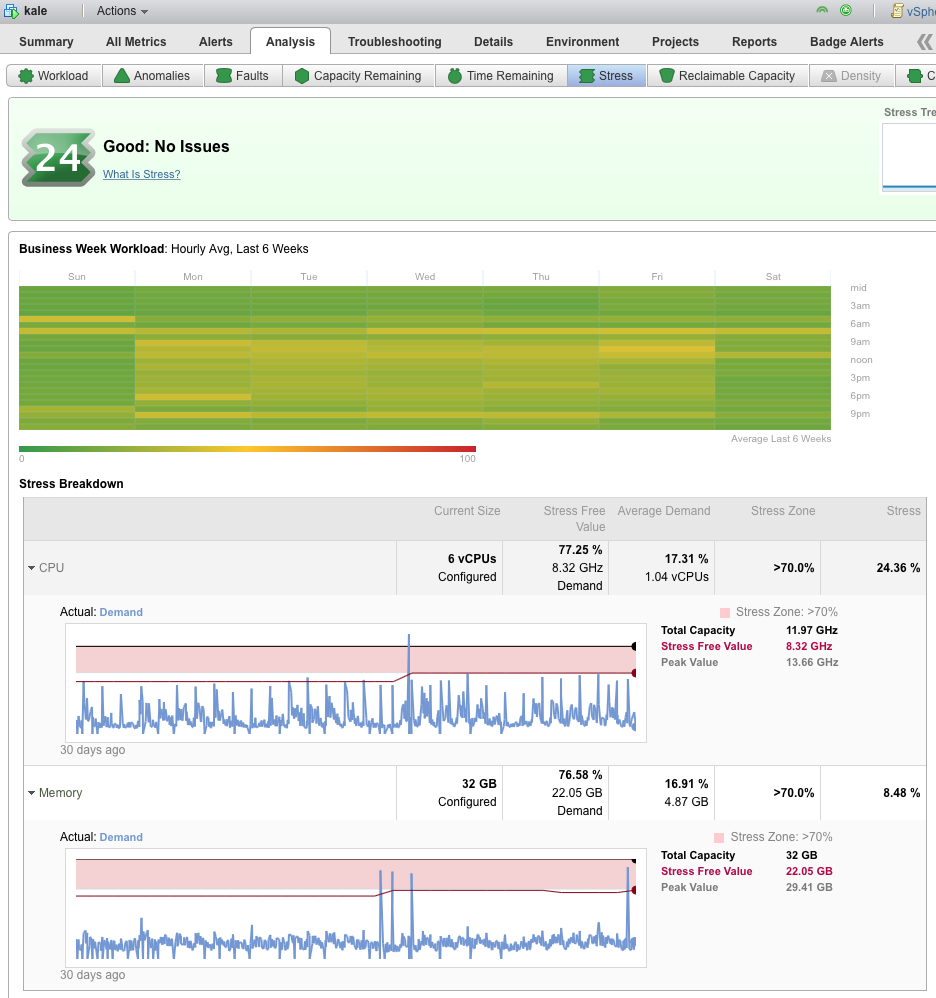 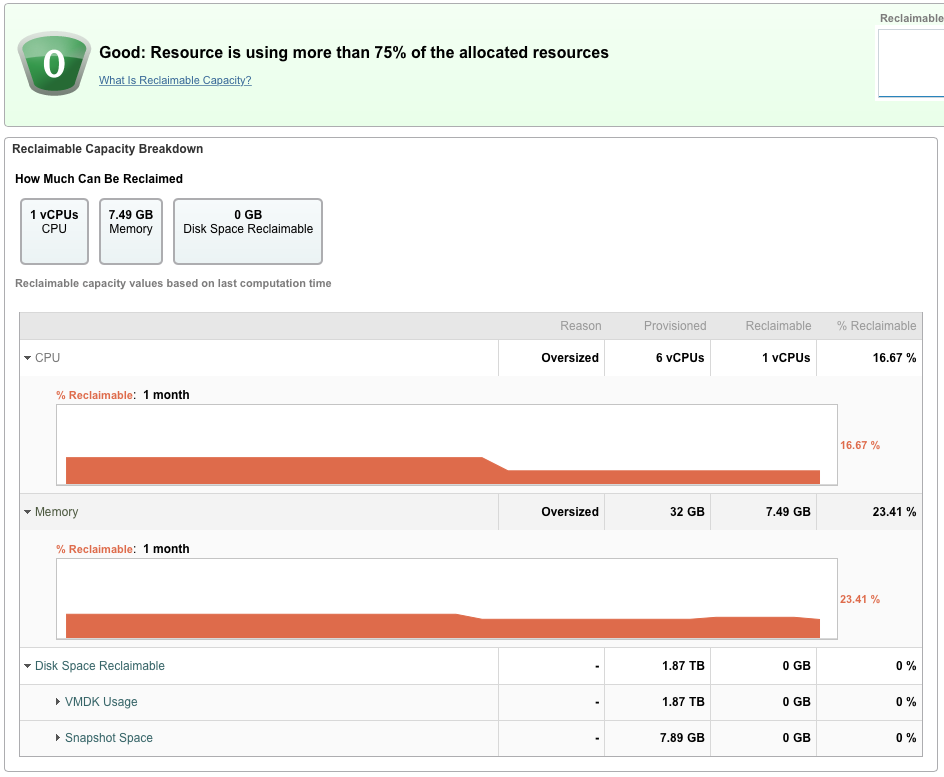 Good-ish: - VM is right-sized. - CPU is overcommitted across the cluster, but we're not running into contention. 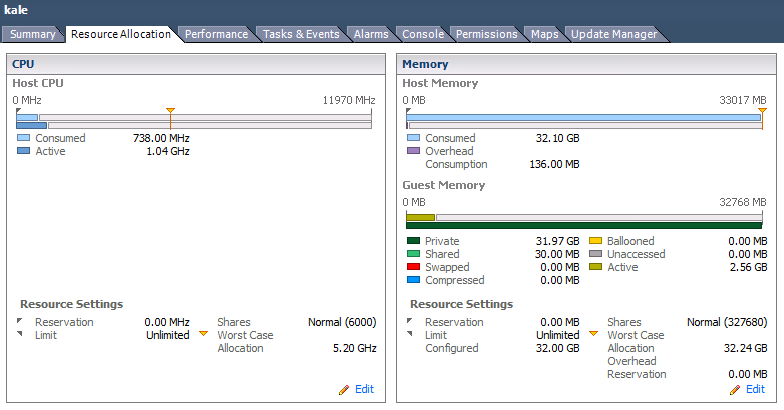 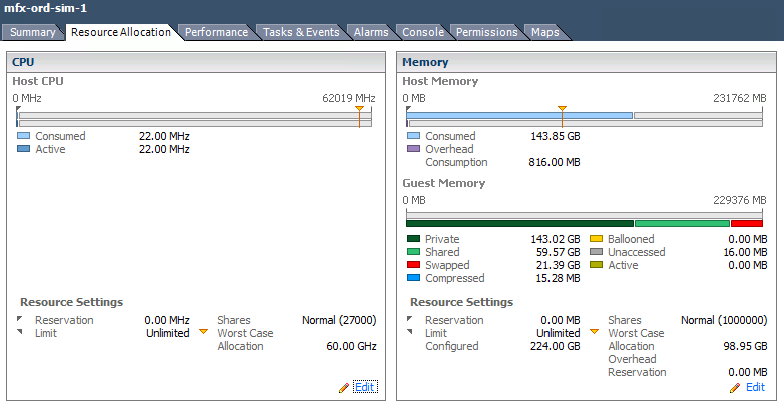 Not the answer you're looking for? Browse other questions tagged virtualization performance vmware-esxi or ask your own question.

57
vSphere education - What are the downsides of configuring VMs with *too* much RAM?

1
CPU Performance on Virtualised Windows 2000 for Oracle 8.0.5
2
Performance testing servers: How to characterize performance?
98
High load average, low CPU usage - why?
1
VMWare performance for a build server - awful or wrong tests?
2
Under what circumstances could adding a CPU to an "underutilized" VMware vSphere 4.1 VM increase performance?
57
vSphere education - What are the downsides of configuring VMs with *too* much RAM?
62
How to [politely?] tell software vendor they don't know what they're talking about
0
How to check that VMWare virtual machine is receiving sufficient resources from the physical server?
1
How do I get utilization information from my VMWare ESX server for CPU, Memory and Network usage?
0
VMWare Disk Performance