I've noticed that by default the below line is included in /etc/network/interfaces:

What is the purpose of this line and what does it actually do?

From the Ubuntu interfaces man page:

Lines beginning with "source" are used to include stanzas from other files, so configuration can be split into many files. The word "source" is followed by the path of file to be sourced. Shell wildcards can be used. Currently only supports absolute path names.

The source command is the textual version of the . (source) syntax. This allows you to include / import code from one file and merge it into a parent. However, what is not clear from a base install of Ubuntu 16.04 is why the source line would be first. Meaning, if one wanted to use a static IP for interface enp0s3 below, does that mean I must first comment out / erase the iface line for enp0s3? 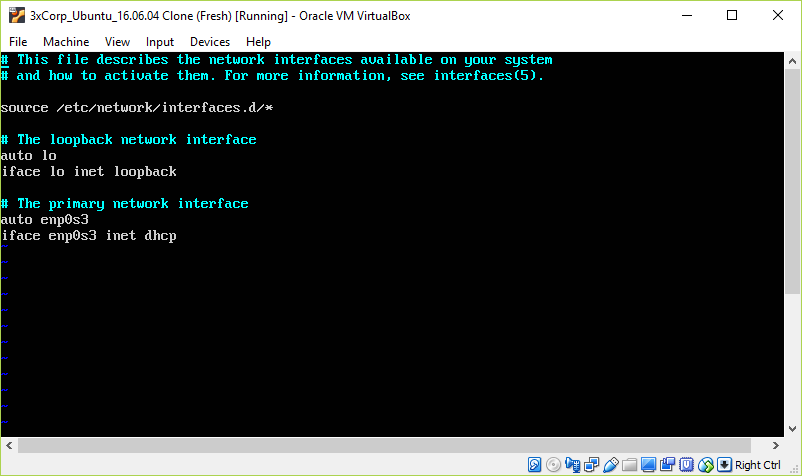 The file and file.d scheme is pretty common. If you run the Apache HTTP Server, you have probably seen the apache24/conf/httpd.conf and it's side kick the extra/ directory, that contains more *.conf files (typically httpd-ssl.conf, httpd-vhosts.conf, php.conf, httpd-default.conf, and more). In this case, shell scripts are not being included, but the principle is basically the same.

Why do it this way?

It is better to mess up only one interface configuration up, then do something that might affect more than one interface. By keeping things separate, it actually makes it easier to write shell scripts that automate stuff.

By keeping things separate, your chances of messing things up are reduced dramatically.

2. Better organization in the long run.

If you think about what interfaces.d/ holds, it holds "instances" of network interface configurations (which can get rather elaborate). In that way, the time saved from having to scroll may make interfaces.d/ the way to go.

Are you planning a professional setup? Use /etc/network/interfaces.d/ to hold the configurations of your network interfaces (one file per interface).

Are you a hobbyist using Linux in your basement (on a computer with one interface) and could care less about making life easier for someone else? Use /etc/network/interfaces and go on with your life. Comment out the default configuration settings, or remove them altogether.

Name the files in /etc/netowork/interfaces.d/ with a similar convention. Red Hat systems use an interface file prefix convention of ifcfg-.

Thus, I might go ahead and use that convention in /etc/network/interfaces/d, absent guidance.

Not the answer you're looking for? Browse other questions tagged linux networking linux-networking or ask your own question.

455
How does IPv4 Subnetting Work?
1
How to fill in the network line in the ubuntu interfaces config file?
494
What exactly do the colors in htop status bars mean?
18
How to see on Linux what network interface and source IP address is used for a route to a specific destination host?
5
/etc/interfaces file for multiple gateways, same network? (linux)
236
Why does my hostname appear with the address 127.0.1.1 rather than 127.0.0.1 in /etc/hosts?
3
/etc/network/interfaces file almost empty
2
What does broadcast +/- mean in /etc/network/interfaces?