Limiting power of a trusted certificate

I am creating a site with my own CA and signing client certs with it. The clients will need to add my CA as a trusted source, but for security reasons I don't want them to blindly trust everything that could be signed with the CA key, so I want to impose limitations to build clients' trust. So I want to limit the CA abilities to just signing client certs and enabling https access. I am not sure all restrictions I should impose in the cert creation.

The best way to do it seems to be Name constraints, and use a white list to limit the usage, which is apparently respected nowadays. So I though I have to use a dns (let's say xyz.com), so the CA signature would not be accepted for google.com f.ex, and put that also in each SAN of the client certificates, so the client certs are considered valid and not rejected. Apparently that's not how it works. I have tried this but I have not been able to make it work correctly. Also, I am getting a warning from Windows... Maybe it is because all possible name constraint types must be present? 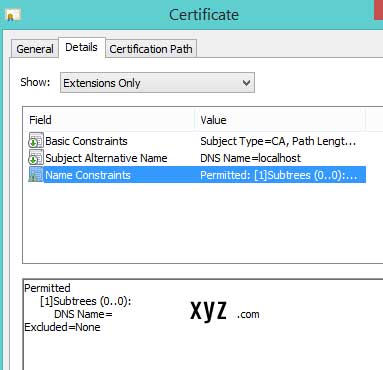 Ideally, there should be something in my CA certificate that forces it to only sign client certificates and do the https server authentication. I don't see how to make this limitation, I think it is not possible.

There are a few constraints that you can set in an issuing certificate, which limits which certificates it can sign.

You have already mentioned those. They can be used to limit which names may be used in the various subject alternative name types of the end certifcate (whitelisting using permittedSubtrees) or may not be used (blacklisting using excludedSubtrees). In practice, the former one is probably which you want. A typical use case would be, to only allow e-mail addresses and dnsNames which end with one of your companies domain names.

This extension can specify, under which policy an end certificate may be issued. Since this is not something you can really technically enforce (apart from comparing OIDs), this won't be useful to you

This one is not really a standard usage, but since your screenshot suggest that you are living in a Microsoft world, it could be useful to you. Microsoft invented the so called Application policy which allows a issuing certificate to limit which extended key usages an issued end certificate might have. By setting this policy to tlsClientAuthentication, you can ensure that only such client certificates are issued and no TLS server certificates or code signing certificates. Outside of the Microsoft cosmos, this extension will probably be ignored.

One final word: Checking these constraints is pretty hard, most software don't even bother to try, and there are not a lot of products out which actually get it right.

Not the answer you're looking for? Browse other questions tagged ssl-certificate certificate-authority pki x509 or ask your own question.

24
Can I be my own trusted CA via an signed intermediate certificate?
123
Certification authority root certificate expiry and renewal
1
Are code signing certificates automatically trusted across the domain if the root CA is trusted?
0
Can't get self-signed CA cert to request corresponding client cert; Apache
0
Certificate not trusted by only a single browser
33
Trusting an untrustworthy CA - Can I restrict how system trusts it?
69
Generating a self-signed cert with openssl that works in Chrome 58
3
x509 certificate with excluded subtree violation issue