I am exactly in this situation:

The RDS role was installed erroneously, and the grace period to decide the licensing mode was left to expire; when I tried to connect, I was greeted with (the Italian localized version of) this message:

Since we use RDP just for remote administration, after reading around that two administrative connections are "built in" if the RDS role is not installed, I removed the RDS role and rebooted; as a result, it was impossible to connect - the 3389 port wasn't even open.

Then, I found that the Remote Desktop setting in the System properties dialog (the same that you would use to enable RDP on a non-server machine) wasn't enabled; I enabled it, and now when connecting I get this message: 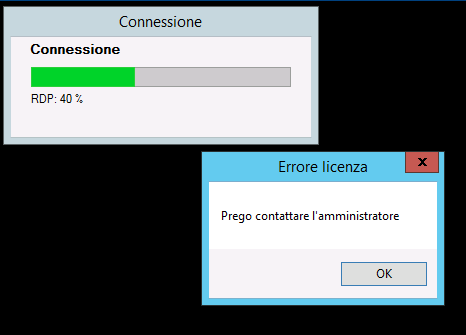 (in English that would be "License error - Please contact the administrator")

which is in fact different from what appeared before (when the RDS role was enabled), but it still isn't letting me in. I restarted the various RDP-related services to no avail.

Is this going to go away after yet another reboot or I have to perform some other magic to convince this thing to let me in? No, rebooting didn't fix anything. Suggestions?

After some extra reboot/update install the problem fixed itself. No idea what may have fixed it, let's hope it keeps working.

Not the answer you're looking for? Browse other questions tagged windows windows-server-2012-r2 remote-desktop licensing remote-desktop-services or ask your own question.