This is a rather old issue but it's starting to get more and more frequent.

We are providing an application to external users trough Citrix XenApp 6.5. The users have a number of different version of the receiver but the problem is the same even with the latest one (4.9 at the time I write this, it wa confirmed at least as far back as 4.2).

The users typically have a windows 10 system with multiple display. They attempt also have different zoom factor for each screen (display settings -> Scale and Layout).

At connection, the application gets zoomed according to the display factor of the screen is initially starts on. This works fine until the user moves one of the application's windows (even partially) to the second screen. Then several things happen:

The problem can be solved by synchronizing the zoom factors of both screens but, of course, that is a major inconvenience when the user has several screens with very different DPIs (typically, a laptop or tablet with a QHD or UHD screen and a main display with a 1080p one). In such a situation, the user has more or less to stop using one of the screens.

Actually, I found an acceptable answer (at least for me).

The user needs to:

Connection will most likely needs to restarted for the parameter to be applied, but the issue is solved (at least for this user). 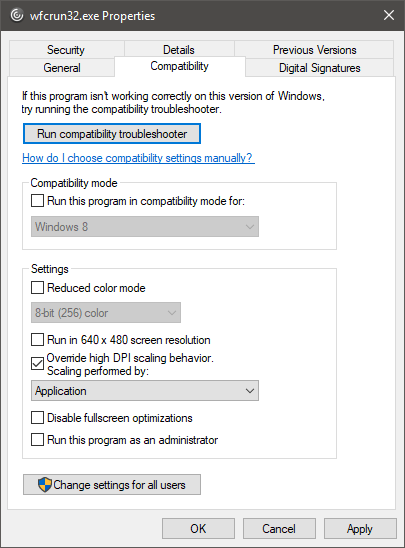 Right click the icon in the tray and select advanced preferences, Select High DPI select "no, use the native resolution"

Fixed the issue immediately, i did have to disconnect from the session and reconnect but that might just be the companys server.

I know this is an old question but I had the same issue but with also making my mouse pointer jump all over the place if I went near the Citrix window, and as this post helped me I thought I would share to help other

I used a variation on one of the solutions here:

Not the answer you're looking for? Browse other questions tagged windows-10 citrix or ask your own question.

0
What would cause previously sent emails to be sent again from Exchange the first time someone logs into Outlook via Citrix XenApp
1
XenApp Web interface: User loging from two different browsers or machines -> Disconnected session
0
Citrix users experience slow performance and freezing sessions
0
Configuring existing Citrix XenApp farm to also works as a Windows RDS farm
1
Citrix Receiver hangs at “Please wait for the Local Session Manager” and published application fails to launch
0
Where do I go on the Citrix XenApp server to recreate Outlook profile?
8
Replacing windows extra large cursor file with one that is 30% larger (Server 2008 R2)