I have a Docker image, let's call it frontend.image, that I use for a Jenkins build slave. The Jenkins Docker plugin will spin up a container from this image and build artifacts inside the container. This all works great. In this case, the frontend.image is used to build an AngularJs app. Part of building this Angular app is to install npm packages the app requires.

This process, npm install, seems to take a long time, 3 minutes it seems, npm always installs every package every time.

So I added a volume for my slave, it is a host mounted volume, the Docker plugin will use this volume every time it runs the frontend container:

That is why I have the host volume /slaves/volumes/tsl.frontend:/home/jenkins mounted to my web container slave.

I build my Angular app using a Jenkins project, builds no problem, many npm packages are installed. If ssh into my Docker host and run cmd ls /slaves/volumes/tsl.frontend I see lots of npm packages. This means my host volume mount for the slave worked.

Now I build the Jenkins project again, npm installs every single package again, even though the Docker slave build container is using the volume host mount. I can even confirm by bashing into the slave container with cmd docker exec -it <some_clever_random_container_id> bash then cmd su jenkins then cmd npm cache ls which lists many npm packages that are cached. 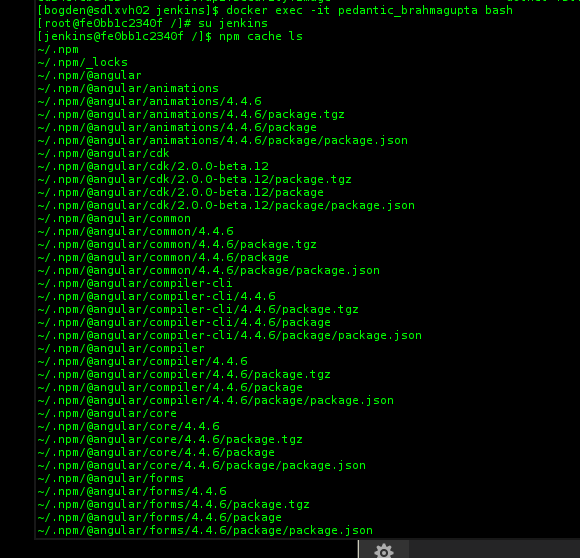 So, even with my host mount volume, which has permissions chmod 777 by the way so there is no permissions issues, I cannot get npm install to use the cache.

I finally solved this by using Docker image layer caching for the npm install, following this answer

This means I moved the npm install out of the Docker slave image and into the actually frontend image, here is my final Docker file that truly caches the npm install in between builds if package.config has no changes:

Not the answer you're looking for? Browse other questions tagged docker jenkins npm or ask your own question.