How to grant IAM access to an already running EC2 intance

I was handed over one AWS account at the root level by a business owner which runs different EC2 machines (staging/prod etc). What I want to do is simply create different IAM accounts that have restricted access. For example now I would like to create an IAM account that only has access to run, terminate a specific EC2 Instance.

What I have tried

I basically followed instructions here. I created an IAM group (called superAdmin), and I created a new IAM account and I assigned a new user (user_1) to that group.

I made sure the resource follows the resource policy to the dot. (note: the instances are running in Ireland, which according to this is the same as eu-west-1)

I then called this policy staging_access and attached it to the user_1 (but also removed all other policies): 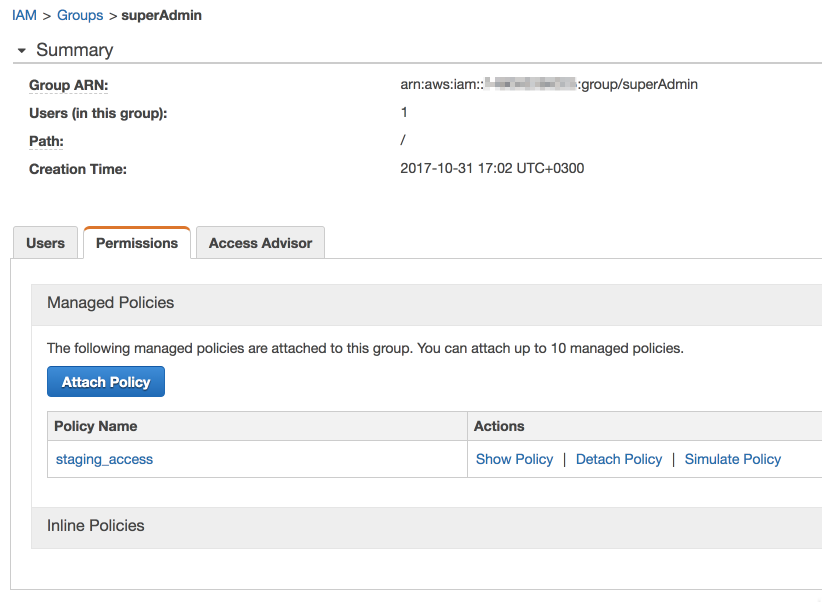 The problem is that when I login as user_1, I cannot see anything:

and when I go to the instances page, nothing shows:

I noticed that if I simply made the resource a wild card.. everything would work:

The interesting part is that even if I set the resource as a wild card on all ec2 like so:

it still doesn't work. Which means that accessing the console UI is a different service namespace than ec2.

You are defining the policy based upon EC2 Instance ID. You need to add more permissions so that the user can display things like key pairs, volumes, instances, etc. There is a difference between assigning permissions to manage an EC2 instance from the command line, which can be very tight, versus the permissions needed to access the Amazon Management Console.

Also, your policy has % characters. Is this actually in your policy or is this just there to show in your question?

A better approach to controlling access to resources is to use Tags. For example to only allow user XYZ to access certain EC2 instances, tag the instances. Here is an example policy using tags. This policy allows the user to list all EC2 instances, but only allows all EC2 actions on instances tagged with their username.

This isn't really the answer i was looking for, but it serves my needs none the less. I created two policies and applied both to the same user

Not the answer you're looking for? Browse other questions tagged amazon-web-services permissions amazon-ami or ask your own question.

7
Amazon Web Services - How do I use IAM to restrict a single user to managing a single EC2 instance?
2
Is there any way to 'describe-instances' for another AWS account from awscli?
6
Restrict the visibility of EC2 instances using IAM accounts
8
Which IAM permissions are needed for ec2-create-image?
8
How do you tag and name the EC2 Instance that was launched by an EC2 Spot Request?
2
Create an AWS IAM policy that only allows resources to be created within a certain resource group?
0
How to restrict IAM policy to not allow stop/terminate an EC2 instance but can create new instances?
0
Access s3 bucket from Ec2 service
0
aws ec2 describe-instances not allowed in user-data?