I'm trying to enable the max cpu frequance for hyper-v guests. In the hyper-v physical host displays cpu at 4.4GHz which is boosted speed:

But the cpu speed is at default speed in the hyper-v guest which is 3.31 Ghz:

How can I use max cpu speed in the guest os? 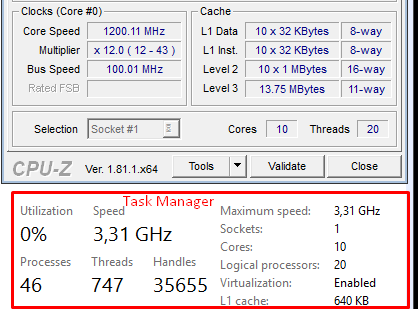 Disabling C-states hurts the ability to use TurboBoost.

But remember that TurboBoost is not active on all cores at once, and depends on what else is happening on the system. It's not a full-time speed increase; it's opportunistic.

These days, I've just been setting my Linux systems and Hypervisors to OS Control mode in the server BIOS. That's all you should need.

Enabling turbo boost does not mean your CPU will always work in Max Turbo Boost frequency. Based on your heavy work load it can reach up to max turbo frequency. look at the CPU utilization in the snapshot you provided its zero.

C states should be enabled as these are the Power saving features for CPU and it only activate based on the CPU work load.

Not the answer you're looking for? Browse other questions tagged hyper-v hyper-v-server-2016 or ask your own question.