Will No-Refresh Intervals on a DNS server apply if scavenging is not enabled?

I recently inherited a rather messy network. In DNS I've noticed that hundreds of systems have A records older than a year. And after running a script to ping all of them, over half of them are still online. We are not (currently) using DHCP and at least according to this link, by default a Windows workstation (that isn't getting its IP from DHCP) should attempt to register DNS once every 24 hours: https://social.technet.microsoft.com/Forums/sharepoint/en-US/e84228ca-95ff-4b22-b478-a8cb60c87c2d/how-often-dns-clients-come-to-dns-server-to-update-their-records-timemtaps-?forum=winserverNIS

These are our current scavenging and refresh settings on the zone: 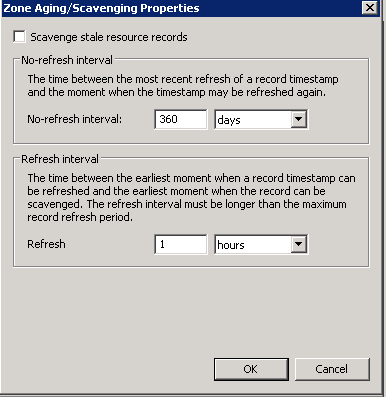 Now I intend to change these settings to 7 days each once I turn on scavenging and I plan on scheduling the first scavenge a few weeks out to give all systems a chance to refresh their A records, but before I do that I want to make sure that there isn't an issue keeping those workstations from updating their A records, lest I accidentally delete 500+ A records that belong to systems that are still active on the network. So is it normal that A record time stamps shouldn't be updating when scavenging is off? Or is there something wrong on those workstations keeping them from updating?

EDIT: So an update for anyone who comes googling for this later. Setting the refresh interval to be longer got my records to start refreshing, even without turning scavenging on. Even then, there were still a bunch of records that were not refreshing but that I could successfully ping, the reason behind the vast majority of these not updating was that they were a duplicate record. At some point in the past someone added a workstation to the domain with the hostname computer1. Eventually it was retired and a different computer was added to the domain using the same IP that computer1 had used at some point, let's say 192.168.1.1. Let's say it was named computer2. So computer1 and computer2 are both valid A records that both resolve to 192.168.1.1, but the actual Windows name of the machine is computer2. Once I get scavenging up and running all of the old duplicate records (different name but same IP) should get wiped out.

First, understand that an update and a refresh are not the same thing. An update is an actual update of the record, such as a host getting a new ip address and updating it's DNS record with the new ip address. A refresh is a refresh of the timestamp of the record with no other change to the record itself. Updates are always accepted regardless of the No-refresh interval. The No-refresh interval is meant to tamp replication traffic in the case that a record is not updated but the client is merely attempting to refresh the timestamp of the record. There's no need to replicate every refresh of the timestamp, especially considering that Windows clients attempt to refresh their timestamp every 24 hours by default.

Third, before enabling aging on the zone and scavenging on the server make sure to export the zone so that it can be restored in the event that something goes wrong.

The no refresh interval means between its last refresh and its next it has to wait at least 360 days to update regardless of what the client is doing.

Separate from that if you were to tick the scavenge stale resource records it would only remove those records which are over 365 days and 1 hour old so with current settings its not giving it much time to refresh before its considered stale.

Its really two functions in the same dialogue box.

Not the answer you're looking for? Browse other questions tagged domain-name-system windows-server-2008-r2 internal-dns or ask your own question.