It creates the shadow copy, backs up the EFI partition, moves on to backing up the C: drive and then fails 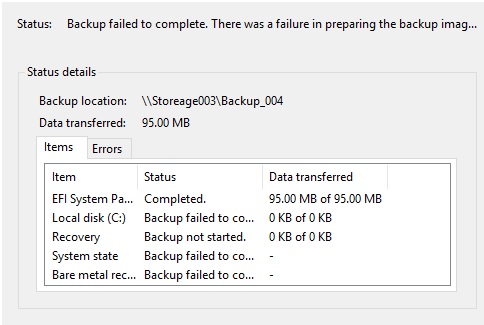 Other servers, plus a whole raft of Sybase databases backup to the same NAS without any problems

I changed WindowsImageBackup to a different name. It created the directory but still fails, getting only as far as

This Saturday (after patch Tuesday) it was rebooted, but still the same. At a loss with this one!

Stumpped by the same problem on my VM 2016 Server were the following error entries on the BU job in the wbadmin GUI: enter image description here wbadmin GUI Backup listed errors

In my case I resolved the issue by:

Afterwhich I then created a scheduled job & executed it once to confirm functionality.

Perhaps, this may help some of you guys out.