This question in not about how to do it, but about what should be done.

The situation is as follows:

What is a good way, hardware and software wise, to connect everything together? (I won't elaborate on the current "solution" because it is horrible)

I have considered solutions:

A) Use one big router

This would mean to connect all WANs and all LAN/VLANs to a single router which would do everything. But is it feasible?

Using a software firewall like pfSense or sophos would offer a lot of features. BUT it would require a server with at least 8 gigabit ports and it might be to slow. From all that I could find, using multiple routes at gigabit speed uses quite a lot of CPU power which then becomes the bottleneck.

One router could handle the WAN side, do the load balancing, WAN firewalling, Traffic Shaping, etc. Could a software solution like pfSense handle this on a not-so pricey hardware?

Another router would then handy the inner LANs. Maybe something like an 8-Port Edgerouter could handle this. It has a firewall which is complex enough for the inter-lan part (but too simple for the WAN part) and can do hardware offloading.

How about the VPN connections? How should the other functions (DNS, DHCP) be divided between the routers? Would NAT work? (Since the clients and pfSense would be in different networks)

Are there other, better, solutions?

Two big router/firewall in HA with pfsense. Now in my data center I use 2 virtual pfsense to mange all:

How much is your time worth? I would simplify.

Configure the Meraki for the appropriate VLANs and ACLs. 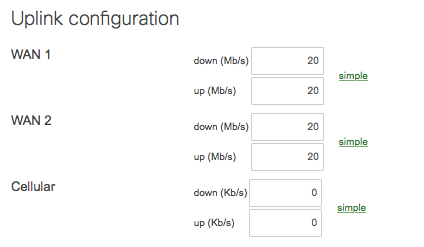 Client VPN is built in. Site-to-Site VPN is available. You didn't clarify what you needed.

You didn't explain if you have inbound services to support. Load balancing is transparent for outbound connections. Inbound would need some form of DNS load balancing (I use AWS Route53, 30 second TTL and health checks).

Not the answer you're looking for? Browse other questions tagged networking load-balancing or ask your own question.