How can I enable WinHTTP trace logging in Server 2012 R2 for viewing raw HTTP commands and application details?

I have an application running on a Windows Server 2012 R2 system and the app leverages winHTTP for various network requests. It's not able to communicate with another server on the network and I suspect (but can't confirm) that there's a network issue.

All of the troubleshooting commands/tools that I'm familiar with leverage WinINET so I don't have an easy mechanism for verifying connectivity. As such, I'd like to increase available logging.

I got that from this microsoft article.

When I try running the same command on Server 2012, I get an error (or perhaps information statement?): 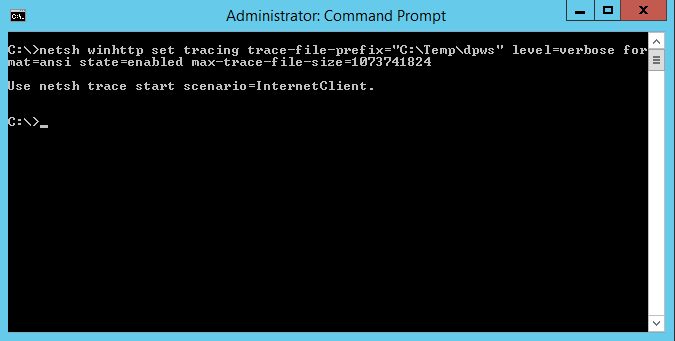 I tried following the instructions and tried running netsh trace start scenario=InternetClient but the resulting ETL file didn't look quite right (perhaps just newbie error on my side). When I reviewed the etl in network monitor 3.4, I saw what looks like system calls:

...but I'm not necessarily interested in that -- I want to see the information occurring at the network connection and HTTP levels. Is there an easy way to see that?

Mr. Google also pointed me to this article but none of the event viewer messages seemed to help or capture the type of information I'm looking for.

Had similar problem as yours, this guide was helpful, i atleast now see stuff in it but not in the most helpful format. The short summary is

Not the answer you're looking for? Browse other questions tagged windows-server-2012-r2 network-monitoring trace winhttp or ask your own question.

1
different between tracert(windows) and traceroute(linux)
1
How can I easily test connectivity to external sources with WinHTTP?
1
ARR troubleshooting 502.3 / WinHttp tracing on Server 2012
0
Issue with offline availability of roaming profiles
3
How to index and search files within a shared folder using Windows Server 2012 R2 and Windows 10?
0
How do I set Windows Server 2012 R2 to always prompt for login when connecting to it?
4
How to enable logging for Kerberos on Windows 2012 R21
1
How can NETSH be used to sniff and collate network traffic?
1
Windows Server 2012 R2: File and Storage Services - Must a User be logged on for service continuity?