What is an Amazon Route53 “Alias” DNS record?

Consider a domain registered on AWS Route53. HTTP requests to this domain should be served from a AWS CloudFront CDN distribution. In order to achieve this, an alias A record is defined: 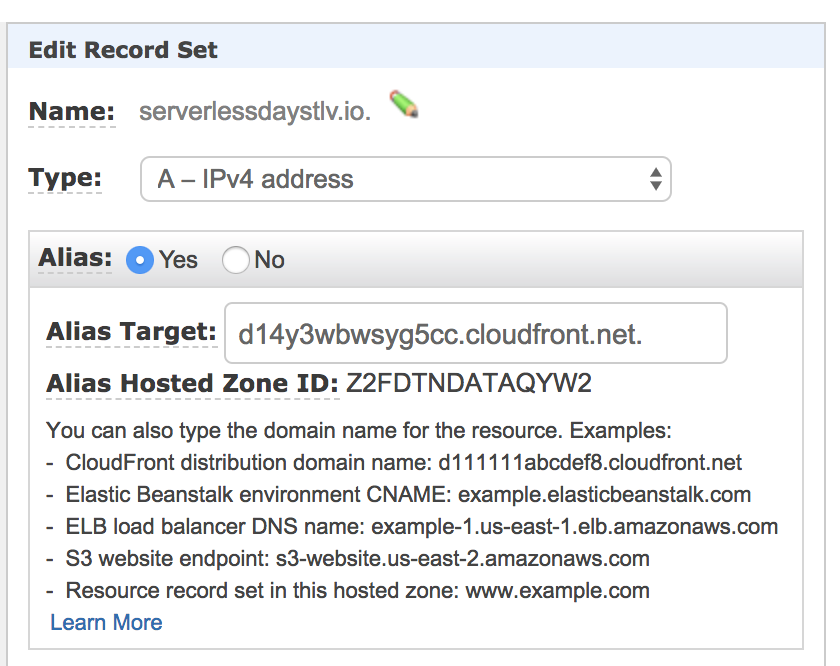 However, dig results shows actual IP addresses. In fact, these IP addresses are not constant and change over time:

What is a Route53 Alias record? Is it a built-in type of a DNS record, or simply an internal AWS alias for the actual IP of the CloudFront distribution that is never exposed to the outside?

Route53 alias records is an own concept separate from DNS protocol record types: e.g. A is an address record and CNAME is a canonical name record. CNAME is the one that acts like an alias pointing to the canonical name, while A has nothing to do with aliases. (See RFC 1035.)

An alias record is an internal Amazon specific pointer working on a higher level; on technical DNS level it may result as an A or as a CNAME, depending on the situation. The DNS doesn't need to be aware of this internal pointer type nor target, as Route53 only answers with the resulting record.

An Amazon article Choosing Between Alias and Non-Alias Records explains this in detail:

Alias records provide a Route 53–specific extension to DNS functionality. Instead of an IP address or a domain name, an alias record contains a pointer to a CloudFront distribution, an Elastic Beanstalk environment, an ELB Classic, Application, or Network Load Balancer, an Amazon S3 bucket that is configured as a static website, or another Route 53 record in the same hosted zone. When Route 53 receives a DNS query that matches the name and type in an alias record, Route 53 follows the pointer and responds with the applicable value:

The confusion is understandable, as you seem to be adding an A type IPv4 address record while the target is a hostname instead of an IP address; something you would rather use with a CNAME!

Not the answer you're looking for? Browse other questions tagged domain-name-system amazon-web-services amazon-route53 alias amazon-cloudfront or ask your own question.