Here is what I am trying to do: I configured an instance on Google Compute Engine to use NVIDIA K80 GPU. You can see the hardware specs below. 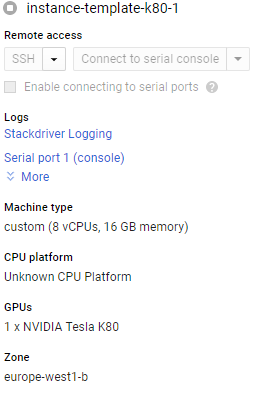 First time I also opened "Quotas" page and requested a GPU for europe-west1 zone. I had "0/0". Then after some bureaucracy proceedings with Google support they gave me one GPU. So now it looks like this:

Now,the problem is, when I launch the instance, I am always getting:

The zone 'projects/eyeframeserver/zones/europe-west1-b' does not have enough resources available to fulfill the request. Try a different zone, or try again later.

This is already second day in row that I am trying it,and nothing changes. The dudes from Google to whom I submit quota requests say it is not their problem. And Google groups are silent.

I also tried to re-create instance from scratch,using different hardware params. it only start-ups ok,if the GPU is not attached.

If the CPU platform you selected was either Automatic or Skylake, currently, Intel Skylake or later + your chosen GPU type NVDIA Tesla K80 is not a supported combination. It is recommended that you should try other combinations like other CPU platform with GPU type or Skylake and P100 or other.

google-compute-engine or ask your own question.