we have shares on a server that should open without asking for credentials (current user has permissions there). The server has several other records in another dns zone leading to it's ip. We can open the share from other servers in the domain by all three possible methods - servername, FQDN, IP. So using \\servername\mall or by FQDN \\application.company.se\mall or by \\ipaddress\mall the share opens without asking for creds. But when you are on the server itself via RDP and try to open this share using FQDN \\application.company.se\mall then it asks for credentials and no creds work instead of opening it right away! I can open it via \\servername\share or \\ipaddress\share when on the server, but only FQDN somehow does not work. Both server name and custom dns name are in DNS pointing to the same address and I can ping and resolve everything. I tested on another server which has another dns entry (besides it's computername.domain) and it behaves the same. I also tried it in some other completely different environment and it's the same.

So is it just normal behaviour, that you if you create a dns A record pointing to your server, you cannot access it's shares while logged on it via RDP using this DNS hostname you created? 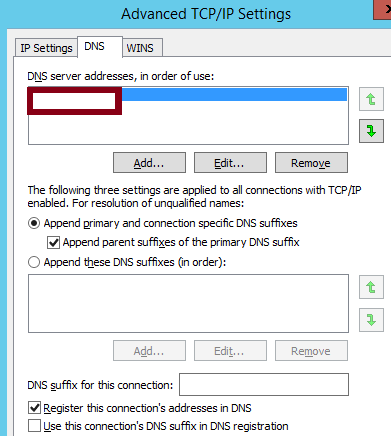 This server is not a DNS server

Check you can ping the FQDN.

You’re using another dns server and not say google dns. If you can ping it, you can do it.

If ping works, check firewall. If you’re running against the FQDN even tho you’re on the same server without a host entry then you’re no longer using the private profile in firewall and need to disable or add an exception for the public profile.

Found a solution on Technet

I put there two hostnames from DNS which the customer wants to use and then it immediately started to work.

I did not need to use that DisableStrictNameChecking value as they mention in linked article.

Not the answer you're looking for? Browse other questions tagged windows-server-2012 network-share dns-zone or ask your own question.

1
One Client cannot connect to one share
2
How to share drive root of USB hard drive in Windows Server 2008?
2
Accessing C$ over LAN on Win2008R2 - cannot by hostname but can by IP and FQDN
2
Windows 8 Client unable to open specific folder of SMB share from OSX Mountain Lion Server - every other share from same server is fine
9
The Network folder specified is currently mapped using a different user name and password
1
User cannot map share from system in another AD Domain
0
cant access network share windows server 2008 Domain