How can I update the SmartArray P410i firmware on a DL360G6? The usual method via SPP Auto-Update fails

Usually this works great-- boot from the SPP ISO, walk away for a beverage, come back and everything's updated. Not so on a few of my servers...

The final SPP release for these old DL360 G6 servers was Oct 2016, so that's what I'm using. Here's what I see during the automatic update process: 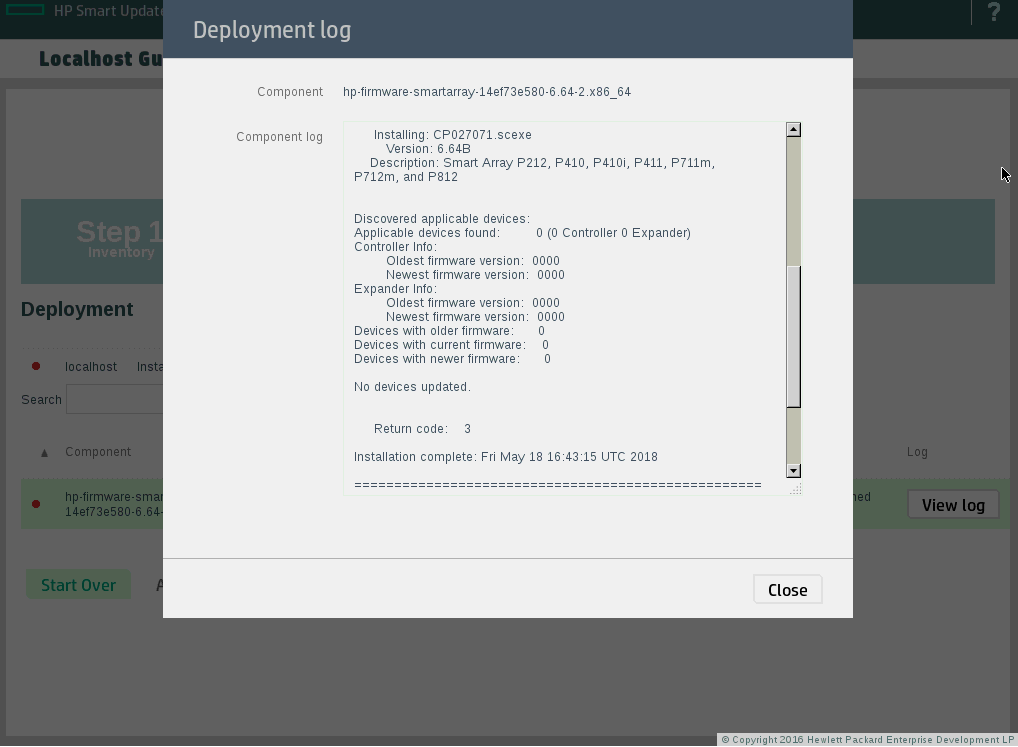 So far I've tried to update it from the OS (ESXi 5.5) using the downloaded standalone driver from HP (which has ESXi 5.5 listed as a supported OS) but that process fails with issues like:

Running the raw .scexe has similar issues. Clearly a case of the OS not supporting the patch script.

I found this article which coincidentally has my identical starting firmware version (2.50) so I'm wondering if perhaps there's a bad version out there that breaks future automatic updates (fun!) https://bugs.centos.org/view.php?id=13184

Based on that, I plan to try and find a live CD that will work for this HP firmware update. Has anyone found one that works well for this process? Alternatively, is there a way to get the SPP update process to work correctly? (I would expect that boot environment to be VERY HP-firmware-update-friendly, yet in this case it seems to not work properly.)

I found something that worked on only the second try.

This fails due to fundamental kernel incompatibilities with the HP-provided binaries. That's not surprising since it uses a Linux kernel version 4 and the HP binaries are for version 2.

This sort of worked. In order to make it work, I needed to copy the dirname and tr binaries from another preinstalled CentOS 6 server. There did not seem to be any way to add binaries to the rescue environment since it's mounted read-only as a loop device from an image in /tmp.

However, I could copy compatible binaries into /tmp and then add /tmp to my PATH.

Here's what was done to make this work on the DL360G6 after booting CentOS6 into rescue mode, enabling network, and dropping to a rescue shell without attempting to mount any existing linux installations:

I ran into a similar problem updating my HP Proliant DL380 G7 with a P410i raid card. Posting to help others.

When I ran hpsetup the error was "310: Bad Substitution"

My solution was to run ccissflash instead of hpsetup. It worked perfectly.

Not the answer you're looking for? Browse other questions tagged hp-proliant hp-smart-array or ask your own question.