I have two Subnets and the Routing works like this: 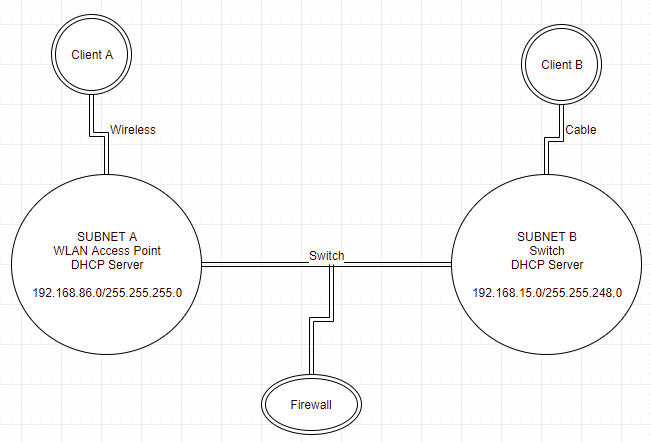 There are no Routes manually configured in the Access Point (Google Wifi Wlan Router - hasn't got a lot of options, let alone routing tables) in Subnet A and there are only unmanaged switches in between.

The only thing that is connected to both Subnets is a Sonicwall Firewall but I don't know if the traffic is routed through that? Because technically there is a more direct route between the Subnets.

There is no Client-Side firewall on either device. In fact I am very certain it has nothing to do with the clients at all (Same behavior for different Clients)

The Default gateway in Subnet A is the Google Wifi Access Point. In Subnet B the Default Gateway is a Windows Server (which has the DHCP Server on it).

Ah, so the Google AP is multi-homed and is on both subnets. From your description it sounds like the AP is providing NAT for everything on subnet A. If that is the case you would have to add a route either on the windows server or the sonicwall (I'm assuming it is the default gw for the windows server). The route would essentially send anything bound for subnet A to the subnet B address of the google AP.

Second, there is no real security between the two subnets if they are on the same switch/VLAN on the switch as indicated in your diagram, or if the wifi AP on subnet A simply has a drop into the switch on subnet B from an AP port that isn't configured to be on a different VLAN.

If, on any client device, you add a zero metric route for subnet B on subnet A, and do the reverse on subnet B (add a zero metric route for subnet A on subnet B), the systems will see themselves as being connected to both networks. Traffic from that system to the other subnet will just use ARP and send directly to the other subnet, bypassing any layer 3 devices (routers, l3 firewalls), and communicating directly.

For instance, if on a linux host on subnet B, you did something like:

The linux host would try to send packets directly to nodes on subnet A by ARPing. Obviously if you are depending on the firewall or routers to provide some sort of security between the two subnets this would defeat it.

Once this is established, you must make sure that any firewalls are not blocking traffic between the subnets. Windows Firewall has fairly strict rules by default. If it's enabled, it's almost certainly blocking traffic in some way between the two subnets. If the AP's drop on subnet B is layer 3 (e.g., a VLAN port not just another switch port), then its firewall (presuming it has one) could also be blocking traffic.

Overall, you may want to take a look at this network architecture and come up with something a bit more sane. For instance, you should likely have a router in the center, not just a switch. If it's a l3 switch, you can simply separate the ports onto different VLANs and have the switch act as the core router between the two subnets, get rid of the drop from the AP into subnet A, and let the router do the routing.

Not the answer you're looking for? Browse other questions tagged routing dhcp switch subnet sonicwall or ask your own question.

4
How do I set up routing for a VPN gateway separate from my main gateway?
4
How to configure remote access to multiple subnets behind a SonicWALL NSA 2400
4
Single m0n0wall - Two LAN Subnets - How To Setup
1
Advice for configuring a SonicWALL NSA 2400 to use two subnets and L2 Bridge Mode
2
Routing between 2 different subnets on 2 different interfaces in SonicOS
0
Sonicwall routing between subnets, firewall rule statistics
1
connecting to subnets with different subnet masks without static routing
1
VPN into router behind a Sonicwall