Windows Server (any version), shared folder with subfolders, something like this:

where Department1 is the network share, and Jim / John are subfolders.

Sounds easy, but I cannot find a way to do that.

Here is how the permissions are set:

(I see this outcome both from the "effective permissions" tool and also when simply logging in as Jim and trying it out).

What SHOULD happen is - nobody can create files in the parent folder, and Jim should not be able to create/modify files in John's folder + vice versa.

If I take out the "List Folder Content" permission from the parent folder, neither Jim nor John can even access the share. But - the issue is: merely adding that LIST FOLDER permission seems to give both users the rights to create, read and modify files and folders ...? How can this be correct or logical?

It does not seem inheritance has anything to do with it - usually you can see inherited users and properties showing up in subfolders and they would be greyed out as they cannot be changed - that is NOT the case. (Inheritance is enabled.)

Sharing Jim and John as separate shares would handle it but I do not want this - the example is simplified, really there are hundreds, it would result in a "flat" non-hierarchical view from the network which I must avoid.

Adding DENY entries for all the "other" users which aren't meant to access the folder will be extremely unwieldy - there are hundreds.

Accessing folders in above example is assumed to always occur from a client computer across the network to the file share. (I am aware that the scenario is different if Jim / John would log into the file server locally, but that is not my question.)

Based on the comment from Evan Anderson I checked all permissions and found an entry inherited from Security permissions of the disk drive itself. It is a "special permission" entry for "server\users", which I understand means local users of that server. And that entry gives Create Files and Create Folders access, and is inherited to my Department1 and Jim/John folders.

I DID NOT CREATE THAT ENTRY. It seems to be a default entry created by Windows on every disk drive on every server I looked at. 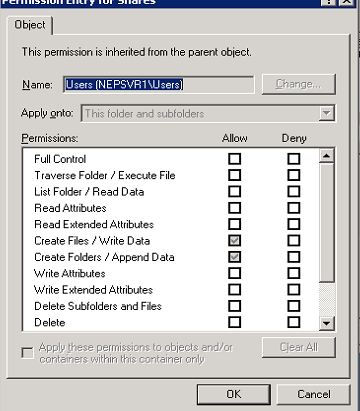 Removing that entry changes the effective permissions for Jim and John both on the Department1 folder and on the subfolders so that the erroneous CreateFolder and CreateFile permission no longer applies - which is what I wanted. So thanks to Evan Anderson.

This opens two new questions though:

"When a computer joins a domain, the Domain Users group is added to the Users group on the computer."

This means that Jim and John are part of the Server\Users group and that's why these permissions apply. So I answered question 3, but question 4 still remains - there should be some sense behind it?

According to my MCITP Study Guide (Server 2008, so it's old-ish. Text and examples taken directly from that textbook, with all rights reserved by the author/publisher):

It's also important to remember that Share permissions are only applied when accessing a share over the network. So, if you're logging into the file server as Jim, you'll be using the NTFS permissions exclusively (connecting without UNC naming).

One thing I would try is to apply the List Contents permission to the parent folder, in this case Department1 and set the respective owners of the subfolders to Full Control. That would make the NTFS+Share permissions List Contents, as that is the most restrictive. You could also try removing inheritance of permission from the subfolders.

I used to administer a setup like this at a previous employer, but for the life of me, I can't recall exactly how we solved it. But maybe the above is helpful to you. Explicitly denying all other users should certainly be avoidable.

See this also for a shorter explanation of NTFS and Share permissions.

EDIT: As an addendum, permissions inheritance is turned on by default. I would think that even if you disable inheritance for the individual user folders, subfolders (eg. Jim/Folder1) would inherit from their immediate parent. I can experiment with this and get back to you definitively, if you would like.

Thanks to the comment from Evan Anderson I checked all permissions and found an entry inherited from Security permissions of the disk drive itself.

It is a "special permission" entry for "server\users". That entry gives Create Files and Create Folders access, and is inherited to my Department1 and Jim/John folders.

This seems to be a default entry created by Windows on every disk drive on every server I looked at.

On Microsoft domains, the DomainUser group is automatically added to the Server\User group so that any domain user has read + write access via NTFS permissions - so therefore, if I give share permissions to all domain users to access the share, this results in every user having read+write access to all folders on the share.

This default entry exists on all version of Windows server, and it makes it easy to add / edit folders on the server, when you are logged in locally.

However, it creates the above problem. I would have to set specific share permissions for the specific users, but obviously that won't work for subfolders.

Removing that server\user entry reveals what I believe is the reason why Microsoft keeps this entry still today in their default ACLs - in that moment only the administrator group has access to the folder, and this means every edit, every access (locally on the server) brings a UAC popup, which is very annoying.

(On Server 2016, after having removed the server\user entry, it does ask you whether you want to add your user name to get control to all folders permanently. That is a nice workaround - it just adds that single user to the ACLs which then does not bring

I recommend also to follow the very good answer from Evan Andersson here which he references in his comment and gives very good tips for setting up folder hierarchies.

2
Windows folder permissions, why is this happening?

0
Problems accessing shared folder in Windows Server 2008
2
In a "Full Control" folder, deny "rename & delete" on some specific subfolders
0
Security groups not allowing domain admin to view files
5
How to prevent Domain Admins from being denied access to network folders?
2
File and folder permissions: You'll need to provide administrator permission to move this file
2
Child Folder inheriting a permission that parent folder does not have (NTFS)
4
Server 2012 R2. Add permissions to all folders and subfolders when inheritence is disabled
1
Server 2012 R2 Shared folder read permissions issue