We'd like to add some other public servers, and if possible would like to have them as VMs under a KVM host, which itself would have a public IP of 203.0.113.1. In addition the KVM host would have to serve as an internet gatweway and DHCP server for several Windows VMs we'd also like to run (which would have private IPs).

Here's a diagram of what I'm hoping for: 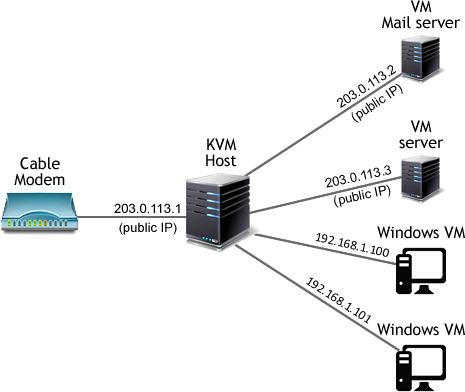 I've never setup KVM before. I've read a number of articles on KVM networking, including bridging, DHCP, etc. but I haven't figured out whether this combination is possible or how I would go about doing it?

How can I setup the KVM host to make this work? Thanks to anyone who can help.

Maybe I misunderstood your requirements. If the VM's are the only living creatures behind the KVM host, only one nic is needed of course. virsh (cli based mgmt client) is included when installing libvirt, along with other virt-xxx tools. So you can manage everything via SSH using these tools, or connect with virt-manager remotely. I dont think that Your setup is very unusual at all. standard "how-to" will fit. The windows VM's will have a nic connected to the default NAT, so they can talk to each other and the KVM host. The other VM's will be attached to the br0 interface. So the internet facing NIC will be attached to the br0, where the external IP address is configured. HOw this is done depends on your distro, but there are guides available for Ubuntu, Centos etc. Check out https://www.thegeekstuff.com/2014/10/linux-kvm-create-guest-vm or https://www.server-world.info/en/note?os=CentOS_7&p=kvm for centos like, or for Ubuntu: https://www.server-world.info/en/note?os=Ubuntu_18.04&p=kvm&f=1

I would consider running DHCP in a VM under KVM, just to lower the attack vector from the internet to the KVM host. It much easier to configure the firewall if it doesn't provide any other services than KVM. You need two NICs on the host of course. You don't say why you need to expose the KVM host to the internet using 203.0.113.1, but I would make sure the the iptables/firewalld is configured to drop anything on that IP. The other servers with public IP will have to use their own firewall daemon as well.

Not the answer you're looking for? Browse other questions tagged networking kvm-virtualization dhcp bridge or ask your own question.