Very basic doubt: I have an application running on a VM with 2 vCPU. The average load is a bit less than 50% on both CPUs.

Does that means that 1 CPU will be enough for my application? Or more CPUs benefit from threads running in parallel?

Edit: Here a real example from my system which consists of 8CPU, over a month. The data are normalised to 100%=8CPU. I wonder if this information is enough to solve my question, basically if the system is oversized.

It's not quite that simple. With one thread or process that burns as much CPU as possible, it will max out at 50% CPU on a dual CPU system. Or, some systems will show it as 100% CPU, because the maximum is 200% CPU then.

If you have two threads running at 50% CPU of one core (so they don't max it out), maybe they will run about as fast on a single core, but then you will see 100%. (This is not taking into account that the machine has other things to do, and that context switching causes overhead.)

I thought I'd show some example graphs that illustrate it.

This server runs 16 high-CPU processes, and some few hundred low-CPU. In March, I decided to upgrade it to 8 CPUs/cores (hence the jump to 800%), mainly because I had to run extra software on it for a while, which you can see. 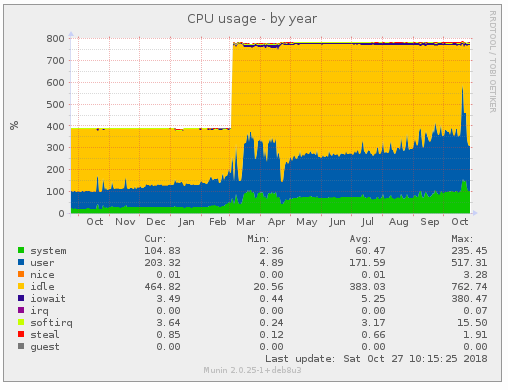 For a large part from May through July, 4 cores could have been enough. However, I do know that some of my processes (doing batch processing) would have been delayed.

This is the accompanying load graph: 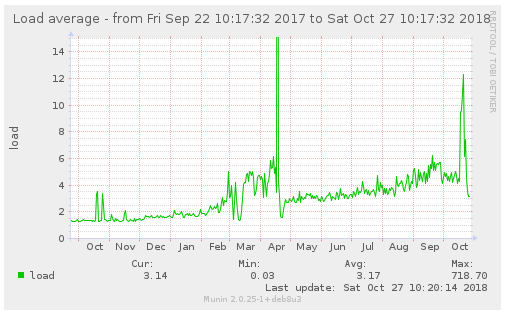 It correlates, but as you can see it's not just percentage/100.

You want such graphs to be able to make informed decisions.

Edit 2, about your graphs:

Interesting. What were these graphs made with? Both of them represent the data the opposite way I'm used to: it seems the CPU utilization goes to 100% for all cores in the system, instead of 100% per core, like my graphs. You can test it by running dd if=/dev/urandom of=/dev/null for a few hours; that will cause one core to max out, and you'll see the effect.

The load graphs shows load per core. I've never seen that before. uptime, htop, munin: they all show just load.

You can actually never understand the requirement just by looking at CPU usage,Modern CPU generate threads in a suitable fashion as per the requirements.

More the core more advantage an application can have to run threads.

Not the answer you're looking for? Browse other questions tagged cpu-usage or ask your own question.

3
mysqld_safe at 100% CPU
0
Only one CPU load on multi core server
6
When is sustained 100% CPU utilization not a worry?
9
How to investigate the cause of a 100% CPU event that lasted for hours?
1
Website performance sluggish - High CPU and Disk Usage
26
How are CPU time and CPU usage the same?
38
High CPU utilization but low load average
1
php-fpm with NGINX response time exponentially increase over time
1
Why does my VM become slower during CPU-heavy tasks after some days of runtime?
1
ZFS: arc_prune is using 100% CPU with high load average