How to launch a server in an ASG behind a LB and deploy code on it via cloudformation?

I am trying to create a quite simple infrastructure for DEV environments. Given restrictions are:

This is the intended architecture:

I got a nice cloudformation template, which fails. Error message:

This seems to be caused by a dependency loop: 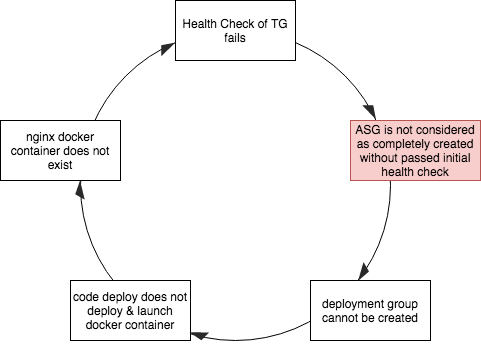 Question: Would it be possible to break the loop by disabling the health checks on the target group? (I did not find such an option in aws). Which other options could help?

In your ASG template you can set the HealthCheck property to EC2. That way it won't depend on the ELB Health Checks and will mark the instance as healthy as soon as it completes the UserData script.

Then in your LaunchConfiguration.UserData you need to send a signal once the UserData script completes:

Note that the --resource parameter must match the TestAutoScalingGroup resource name.

Not the answer you're looking for? Browse other questions tagged amazon-web-services amazon-cloudformation or ask your own question.