Server 2016, this is our SCCM server. I'm attempting to troubleshoot an issue with our SCCM instance and I notice that the IPv6 Link-Local address contains the word 'bad' at the end.

I can literally find no mention of this anywhere. Can anyone explain that? 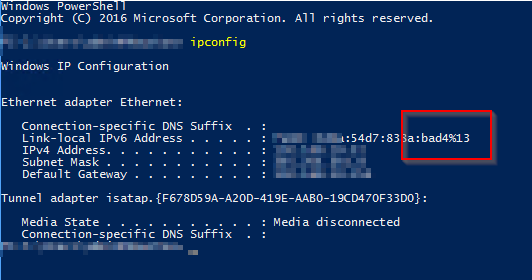 That isn't an issue, it's just a random thing that can happen because IPv6. I'm not sure why the initial answers on this were given in the form of comments, but whatever.

IPv6 addresses are 128 bits long. If they were given in the same format as an IPv4 address, that would come out to something like

To make that shorter, they use base 16, which borrows the letters a-f for the extra six digits. They also put in another trick: the largest range of consecutive 0000 blocks can be simply eliminated, just marked by having a double colon. Because even

is pretty ridiculously long. Note by the way, there's also a 'd' and an 'a' apart from the 'bad' you noticed. So with the zero reduction, we get

Not the answer you're looking for? Browse other questions tagged ipv6 windows-server-2016 or ask your own question.