I have a public IP and and a public /29 subnet assigned to the same NIC in a server running ESXi. I have installed pfSense, as a virtual machine on this ESXi.

I gave three virtual NICs to the pfSense:

I assigned the public IP to the WAN IP of the pfSense, and the first IP of my /29 subnet to the OPT1.

I realized that the OPT1 subnet is a public IP subnet, which will need routing, so started reading the available documentation. What I want to achieve is really this: 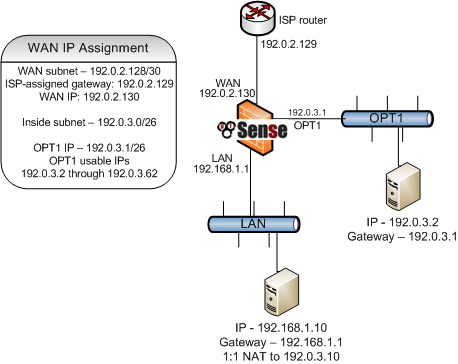 I started with the OPT1 part, LAN part to be configured later. I tried to follow this howto, and I failed. I am afraid it might be down to how I configured Interfaces/Bridges/OPT1 : Member Interfcaces=WAN,LAN

The symptom is that the VM on the subnet can not connect to or ping pfSense anymore. "Network device is connected, no network access".

Is my OPT1 misconfigured? Some help or a troubleshooting guide would be most appreciated.

I see two major troubles to deal with.

My opinion is that you don't need multiple subnets for that in an ESXi environment, however you can if you want it on some - here undetailed - reason. It complicates the problem, and the gain is zero to little. The advantages what I can see:

In my opinion, the best is to utilize the defense of the ESXi, to make your pfsense simpler. If you do this, do it so:

Contrary the common router/switch setups, here in the ESXi world you have the major trouble that not having real PROMISC access, you also can't really trace, what is happening to your packets. However, in the pfsense top menu, there is a Diagnostics -> Packet tracer, and there you can really trace everything. Never try to interact blindly with your system, use always the capture data to understand, what is wrong with your current config and where to go further!

Note also, using many ESXi one might develop the custom to like to bridge their subnets together. It is a very different custom than we do in the ip routing configuration, where bridge has its role and is applied where it should do.

You can put the NAT and routing subnets to different subnets, the steps will be roughly the same.

1It is very likely, that here lies the real cause of the problem.

Not the answer you're looking for? Browse other questions tagged routing subnet pfsense or ask your own question.