I need to configure a firewall server with two internet lines (A on eth1, B on eth0) and an internal network (C on eth2). Additionally to the default routing table (via A / eth1), I have two routing tables with their own default gateways each. 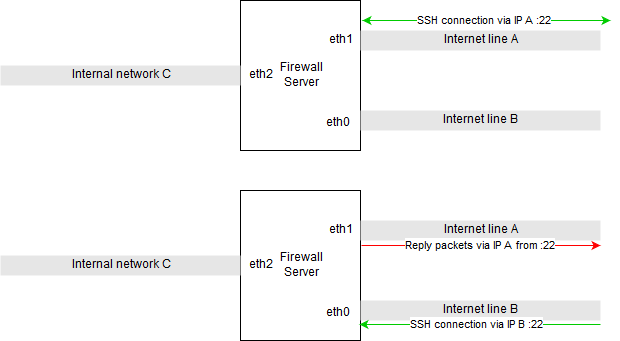 How can I achieve this?

What I have tried so far: I have configured sshd, so that it listens on a second port (122). I have then added a

What I have also tried so far:

I can control the traffic originating from other computers in internal network C to be sent via either internet line A or B - by just marking their packets in the prerouting table:

Your setup requires usage of PBR (Policy Based Routing). You're using it, but not complete. You can solve you issue by two ways:

Not the answer you're looking for? Browse other questions tagged iptables iproute2 or ask your own question.