DNAT using iptables only works for traffic incoming on eth0

I have a machine with two interfaces that have different routeable IPv4 addresses. To return traffic on the right interface, I used this answer and comment, and it works: I can ssh into the machine using either IP address. (I don't know if this has any impact, but it might have.)

Now I added the following iptables rules for reverse proxying / DNAT using this answer. My boot script now looks like:

Initially, the -i eth* was omitted and the DNAT rule was just one command. The MASQUERADE rules were also one command by exchanging -o eth* for -d 10.0.0.1. I split them in an attempt to make the interfaces explicit, in case iptables implicitly takes one of the interfaces.

When I try to reach 192.168.1.2:443, the traffic is forwarded and masqueraded as expected. The hit counter for the correct DNAT rule in the PREROUTING table is incremented and the right MASQUERADE rule is incremented. I can successfully build a TCP connection.

When trying to reach 192.168.2.2:443, I can see the traffic incoming on the interface, and the hit counter for correct DNAT rule in the PREROUTING table is incremented. But there is no outgoing packet and neither of the two MASQUERADE rules in POSTROUTING is incremented. The TCP SYN never reaches the remote system (10.0.0.1).

Note that it does not matter if the forwarding happens through eth0 or eth1, it's fine to forward the traffic to the target (10.0.0.1) over either eth0 or eth1.

Why do the iptables rules work only for eth0 and not for eth1?

Edit: It might be relevant to know that proxying in userspace works fine:

Allows traffic to flow both ways, as described in this blog. The problem with this solution is that the remote end sees only one, persistent TCP connection. It should see one connection per client and handle multiple clients simultaneously. 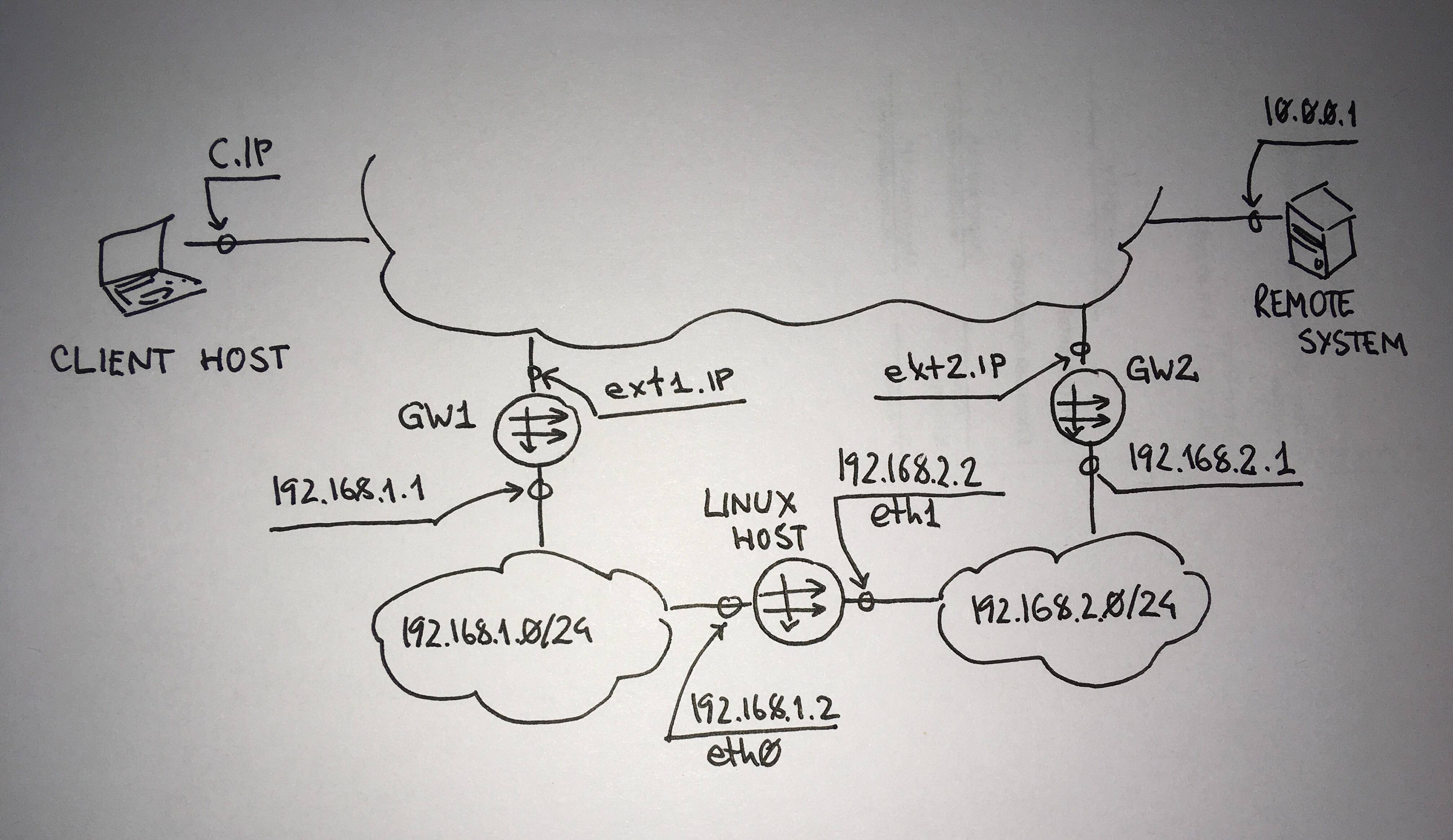 I think this is side effect of the reverse path filter, because the packets are dropped at the routing decision step.

Check the output of nstat -az 'TcpExtIPReversePathFilter' command. Likely it shows nonzero counter, that are being incremented at checks.

Check the routing with command ip route get 10.0.0.1 from <external-host-ip> iif eth1. I think it will show something like invalid cross-device link.

You can see the current state of rp_filter on the interfaces in the ip netconf show command output.

Disable the rp_filter or better set it into loose mode. The rp_filter prevents a spoofing of ip addresses in downstream networks, what is widely used in the DDoS amplification attacks. In your case the tuning doesn't add the new risks because your linux host isn't the main gateway for connected networks.

It's not a last issue in your setup. Fix the problem with rp_filter if exists and I'll extend the answer to make your configuration work.

Now, when the rp_filter issue has resolved, let's try to make the configuration work as expected.

The main goal is to route back the packets through the same interface, on which these packets has been received. To do it we will use the simple routing rules.

All packets, received on the particular interface, will be routed by limited routing table, in which there are only routes for single interface. It simplest solution, but it removes the ability of the linux host forward the packets between interfaces (from eth0 to eth1 and vice versa). If that isn't suitable for you, there is another way, but it's more complex. I'll describe it if you need.

Not the answer you're looking for? Browse other questions tagged iptables linux-networking dnat or ask your own question.

5
How to configure traffic from a specific IP hardcoded to an IP to forward to another IP:PORT using iptables?
6
Forward http traffic to another ip address with iptables
0
Iptables DNAT / only one url
2
Iptables string
0
Config differents external proxy to every VM with iptables
1
IPTables DNAT WAN interface to hosted VM fails but DNAT to WAN IP succeeds
0
(dnat|redirect) with masquerade doesn't work
0
Need correct iptable rules for NAT instance to prevent loop back for private subnet EC2 instance outgoing traffic
0
DNAT redirection works but returns with the redirect IP