I faced today a problem with setting up a working "work-place" with 4 PCs and one virtual machine placed on the one of the PCs.

The problem came up when I was supposed to connect "another-like" PC using Hyper-V with virtual Windows Server 2016 on it. I couldn't get it working - I mean I managed to put through the internet from the host into the VM Windows Server - but its IPs had to be set automaticly, because when I was trying to set it manualy (in order to get VM working in the same LAN network where all the 4 PCs where already working) - it simply lost an actual connection with the network and the rest of the PCs (besides the host PC) couldn't ping the VM - as it wasn't in the same LAN network.

I have two ways of making a virtual network in Hyper-V - one is to turn the mobile modem connected to the one of the PCs (the host) into a virtual one or trying to make a virtual ethernet connection - just like the rest of the 3 PCs are connected (via switch) - but I couldn't get it working in the both cases. 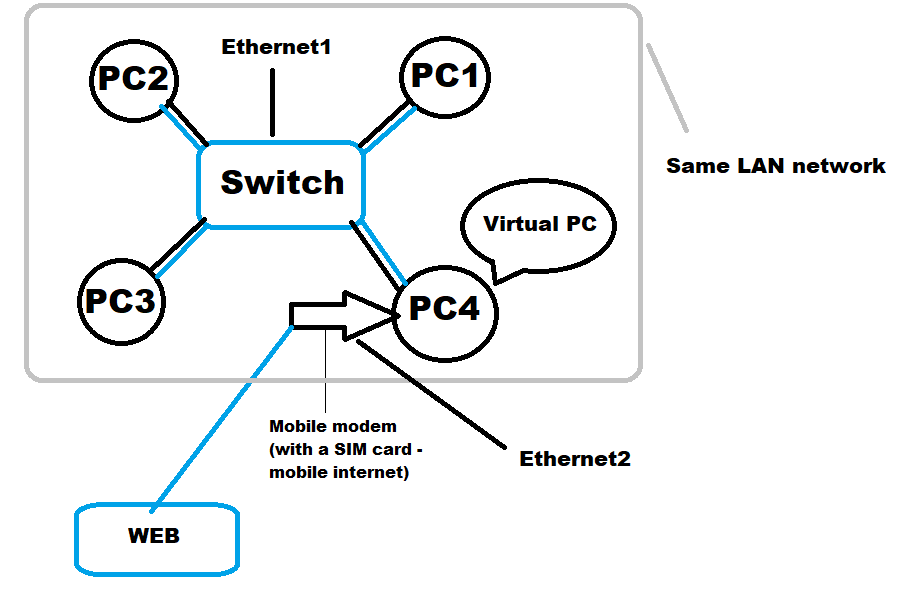 I've made a simplified representation of how does it look like. PC4 has a mobile network with internet connection. All 4 PCs are connected via switch and are in the same LAN network (ethernet1) and moreover - these take the internet from PC4 (thanks to the mobile modem - called Ethernet2). Now I launched VM in Hyper-V on PC4 - it needs to take the internet for itself and still to be in the same LAN network as rest of the PCs (it should act as PC5 actually for example). Now in Hyper-V I have two options - to make a virtual switch with Ethernet1 (LAN) or Ethernet2 (Modem) - but I couldn't make work none of these. So maybe someone could at least give a lead of how IPs and Gateways should be set - or what exact settings in Hyper-V should be done? Sorry to be so novice but it's actually my first try with something like that - never done it before.

Browse other questions tagged virtual-machines switch local-area-network or ask your own question.

5
How to connect a switch to a wireless network?
2
connect PCs on LAN to internet (using RRAS)
2
Monitoring LAN with Zenoss
2
Cannot access LAN Printer
0
Server 2012 Hyper-V: use lan AND wlan for client?
0
OpenVPN pass through to lan and out second internet connection
1
How to use two different ISP on same LAN with one Ethernet switch?