Can't get a serial console on MikroTik RB4011iGS+

I am trying to connect to the serial console of my MikroTik RB4011iGS+.

I might be missing something obvious, but I can't seem to get a terminal (or anything else).

My current router configuration pertaining to /system console and /port:

I have also tried working with 9600 baud and using the port serial1, with the same (lack of) results.

The RouterBoard is connected to my Linux machine running minicom 2.7, through the following cable connections:

This is the pinout of the Cisco-style adapter, as present on the corresponding MikroTik documentation page: 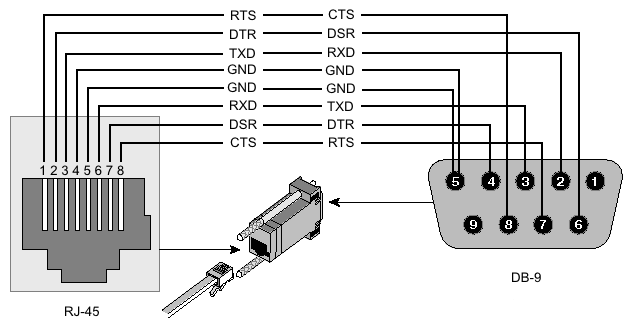 This is the Serial-to-USB kernel log and lsusb entry:

I literally grabbed an old 486 with Windows 95 to make sure the Serial-to-USB cable works fine, and I succeeded in communicating at 9600 baud between HyperTerminal/Win95 and Minicom/Linux using the Serial-to-USB converter and a null-modem cable. 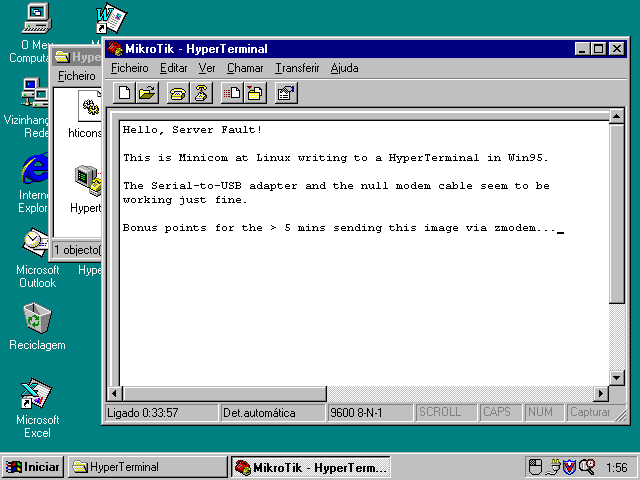 I also tried to plug the Cisco-style adapter directly to the Win95 serial port. I wasn't able to get a terminal on HyperTerminal either.

I also tried to use picocom and later screen instead of minicom. None made any difference.

So, the problem shouldn't be in the adapter (it's wired fine, and I have two of them), nor the RJ45 cable (it does Ethernet just fine), nor the Serial-to-USB converter. However, I don't see anything else I can configure on the router (which I have also rebooted, and nothing showed up in the serial link - not even boot information). I followed all instructions from MikroTik, and even YouTube videos.

I'm now going slightly mad, knowing this is going to be some sort of stupid mistake. What can I possibly be doing wrong?

So, I knew this was going to be a stupid (and embarrassing) mistake. I'm just sad it took a failed RMA in the meantime.

TL;DR: the adapter's pins are inverted (rolled?), and I systematically tested it upside-down, probably assuming I was supposed to match the male pins instead of the female, so everything looked alright. A straight RJ45 cable was not appropriate. I needed a rolled RJ45 cable.

How long did it take me to find out? It's story time, hopefully to help someone else in the future:

I contacted the store, showed them this post, and they also concluded that it may be a malfunction, and created an RMA. I sent the RouterBoard over, and waited.

The next day, the store contacted me indicating that everything was working fine, and no anomaly was detected, so it was clear something was wrong on my side. Keep in mind, this is the first time I'm doing RS-232 over RJ45.

I received the router today, tried again, and the problem obviously remained.

Finally, I decided to do the obvious thing, and made my own adapter, since that was the only part I never had a chance to test (and never really used) before. Perhaps my adapters had a bad contact or something? Thankfully, I have a cable stripper, and I still hadn't soldered my gigatron.io, whose Pluggy McPlugface PS/2 adapter has a female DB-9 connector that I can use.

So, I stripped an RJ45 cable on one side, and wired the adapter on a breadboard (previous Cisco adapter also pictured): 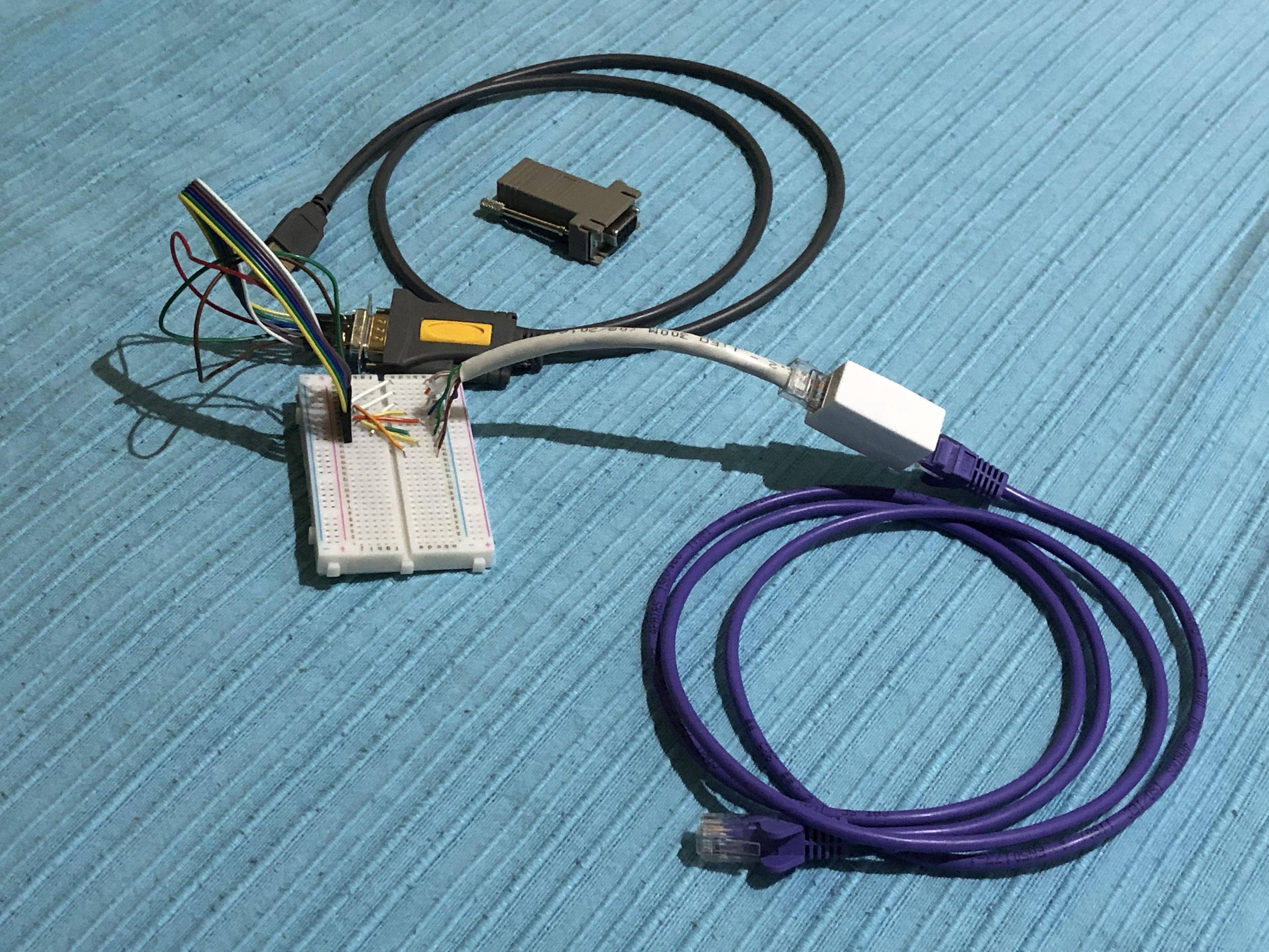 And it worked immediately, on the first attempt, right from the RouterBoard boot. 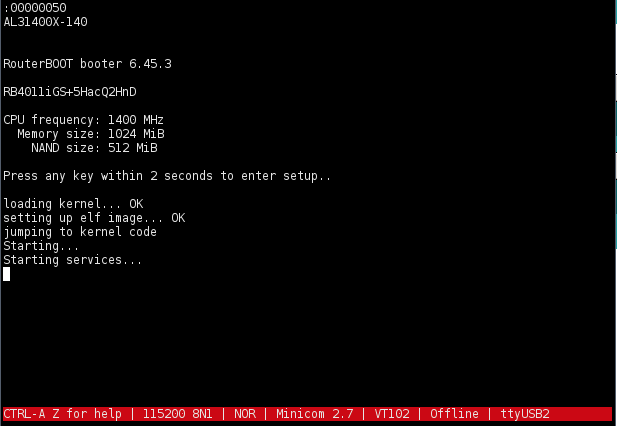 Only after reaching this point did I notice that I had the RJ45 contacts reversed to the ones in the adapter.

The Cisco adapter is inverted (rolled?). I looked it up and found out it's a thing.

So, a straight RJ45 cable is not appropriate. A rolled RJ45 cable was required, and I will be using the rest of the cable I stripped to make one up.

That's it. Probably the kind of situation where a second pair of eyes would have spotted the mistake far sooner.

Thank you for your attention, and you may now collectively groan!

I use screen- with THIS serial cable which works with both OSX & Linux - to connect to my router's RB4011 router's serial port.

The syntax of the screen command your require is:

To connect to my RB4011iGS+5HacQ2HnD-IN router, the screen command I use is:

Note that device"ttyUSB0" is specific to the serial cable I'm using. But the rest of the command you can use as specified.

All the "HowTo's" for using screen to make a serial connection I've found on the 'net only tell you to pass just the baud rate to the command, but this is insufficient when I tried it. Without additionally passing the *Transmission Rate and Flow Control to screen, the command will just hang when you try to connect to the RB4011.

My serial config on the RB4011 is as follows:

I've also successfully used minicom -s to make a serial connection to the router. However, as minicom makes you go through setup menus to configure the connection, I prefer screen which lets you just pass all the required parameters directly to the command.

Not the answer you're looking for? Browse other questions tagged mikrotik serial routeros or ask your own question.

2
USB/Serial converter, data passes only one way
0
How do I connect to the serial console port os a Sunfire 280R?
1
Serial connection over a single USB cable (Windows to linux, or linux to linux)
3
What serial cable do I need for a Cisco/Linksys SRW2024P?
2
UltraSPARC Serial Port and Required Cable
1
Text on Cisco ASA console is garbled/missing letters
0
Minicom Serial Port Connection Output
10
Connect to switch's console port through ethernet patch panel