How to resolve sub-domains in bind9?

In our company we have separate /24 subnets from one big class B (/16) address.

(refer to the picture)

I also can go out to the internet using the DNS server in domain3.company.com as a forwarder.

But when trying to resolve anything in another subdomain (ex: server3.domain2.company.com), it fails. 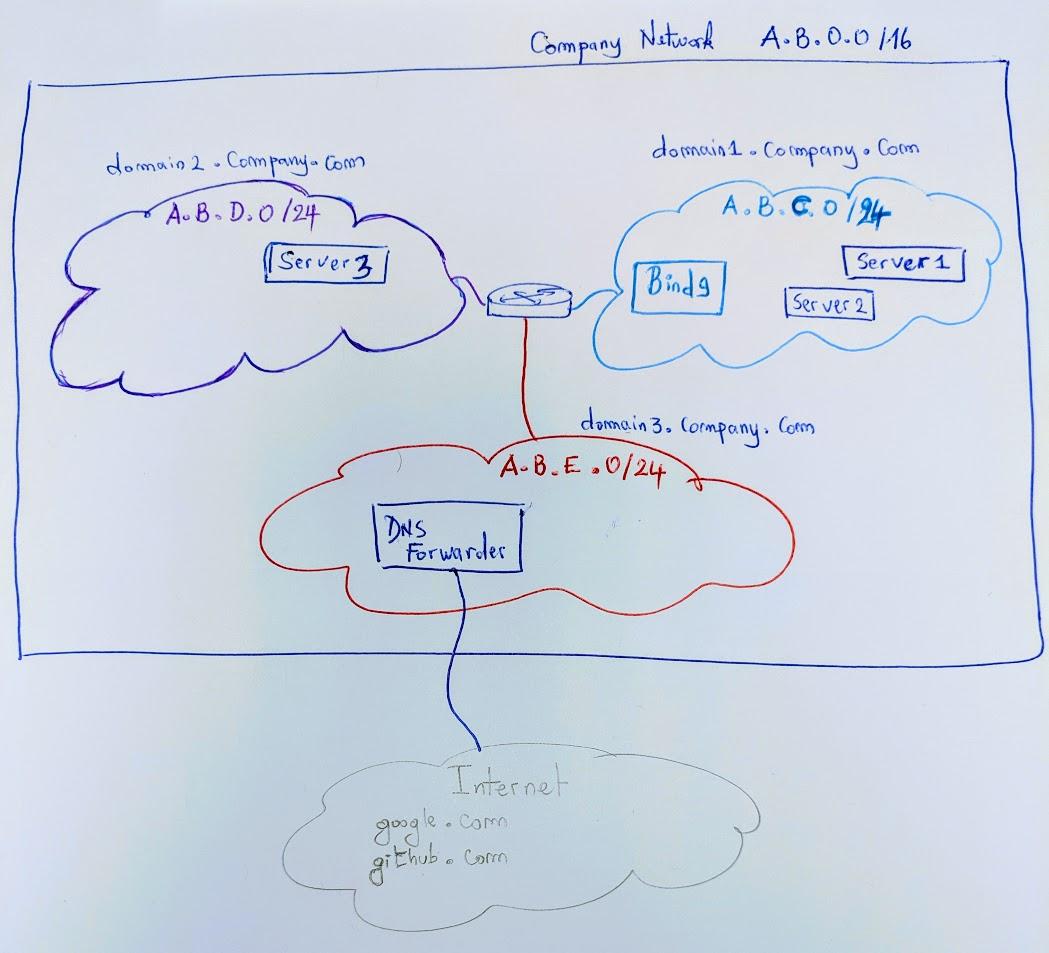 what can i do to solve this, if i don't have access to other DNS servers in other subnets? (can't change their config)

For the purposes of discussion, let's call your company's domain example.com which is fictitious, as opposed to company.com which really does exist.

TL;DR Debug DNS problems from the top down, until you find the level at which things break. Edit your post to include some basic dig results, such as:

Without more detail in your question, such as specific dig queries and their detailed results, it's difficult to definitively assess your problem.

If none of the below helps, edit your post to show the results of those commands.

If you will pardon a bit of review for those readers who are learning about DNS, DNS is essentially a hierarchical database, where top-level nameservers specify information for second-level nameservers, and so on down through what can be several levels of recursion. DNS can also be arranged in a "flat" topology (domains and sub-domains all mixed into the same zonefile), but at least at the highest levels, it is hierarchical.

Let's refer to your company's domain name generically as example.com.

At the top DNS level is the "." zone. This corresponds to your "hint" zone in your config. That hint zone lists several apex-level DNS servers:

Each sub-level requires the level above to be correct

These "root-level" nameservers know how to get to any of the levels below that, the next "sub-domains" if you will. They know that "for com addresses, go here. For org addresses, go here." And so on. Since we're referring to example.com in this case, that means the the next level down is the com hierarchy. This same thing often happens at multiple levels as we recursively descend through the DNS hierarchy. If any level gives out invalid information, it is unlikely that any sub-levels below that will function properly. I suspect your company's top-level nameservers might have a configuration error, or perhaps an intentional access restriction between domains, for whatever reason.

We can arbitrarily choose one of the ROOT-SERVERS nameservers and ask it where we should send inquiries for .com hostnames, using the stalwart DNS utility dig. Here we use dig to query a nameserver @198.41.0.4 and ask for the domain com. what are the ns records -- that is, what are the nameservers for the com domain?

That's a fair bit of output, so I'll break it down. The most important line for our immediate purpose is:

This means the nameserver we queried at 198.41.0.4 received 1 query, returned 0 answers, and 13 authoritative sources. We'll ignore the "additional" entries for now, but they're basically there for convenience and to speed further DNS queries that are likely to ensue.

The fact that we received 0 answers basically means the nameserver is telling us, "I don't know the answer ...", and the 13 authority entries mean, "... but I do know that these nameservers can answer that." This is called a delegated domain. The top-level ROOT-SERVERS don't have direct knowledge of the com domain (other than it exists), but they have specifically delegated authority for com domains to the 13 nameservers that appear in the list. Any one of them can be queried for details about domains in the com heirarchy. Let's do exactly that:

Part of that information is fictionalized for the purpose of illustration. In particular, let's pretend that the 172.16.x.y addresses are real, public IP addresses, which they pretty much have to be for a real .com domain. Again we see the ANSWER: 0 so the nameserver is telling us "I don't have direct knowledge of example.com, but these nameservers do." ns.example.com and ns2.example.com are your company's highest-level domain servers. They may not be resolving servers (and best practice is that they wouldn't be), but they have to be authoritative. That is, they need to either a) have the answer to any DNS query regarding your company's example.com domain; or b) they need to know where to refer a DNS client who seeks any DNS record that is not directly available from them. It seems likely that this is the level at which your problem originates, at your company's top-level nameservers.

As I mentioned earlier, the hierarchical nature of DNS means that a high-level problem can block lower DNS levels from working correctly. Specifically, if it were the case that a configuration error at ns.example.com prevented you from getting information about the sub-domain domain1.example.com, that is one reason why you might be experiencing problems. Another reason could be that the top-level nameserver is giving out correct information, but internal company routing or firewalling policies are intentionally or inadvertently blocking your access.

This might help you figure out whether it's a config error, or a routing/firewall problem:

That should return something like the fictionalized information above, and tell you what the top-level nameservers are for your company name. Now we'll query them directly, and ask it for information about a sub-domain. Since we're skeptical, we'll ask it a question we already know the answer to. The nameserver for domain1.example.com is your BIND server, correct? Let's see if corporate nameservers agree:

Instead of 172.16.177.4, use the actual IP returned by the previous dig command. Generally, the information you then see should confirm the configuration of your existing BIND server (it's hostname and IP number), since it is authoritative for domain1.example.com.

By the same token, the top-level company nameservers should also know the correct nameservers to use for all valid sub-domains in your company. By definition an authoritative nameserver has to know the answer to any query in that domain, or at least be able to refer to another nameserver that knows the answer (or knows someone who knows, etc.). Since domain2.example.com is a specific problem case for you, let's look at that:

There are at least a couple cases that could arise here. As the first case, let's suppose that ns.example.com is misconfigured and doesn't know that domain2.example.com exists. You'd see an answer like:

Again, note: ANSWER: 0; AUTHORITY: 1. "I don't know" but the second part is different. In the "referral" replies above, we were given additional NS records to consult, which means "I don't know, but ask one of them." Here the "authority" entry is the "Start Of Authority" record for the domain itself. In other words, it might mean "there is no one else to ask, because I am the definitive server for example.com." This style of result (answer:0, authority pointing to SOA for the domain) is a definitive "that record does not exist." The string rcode: NXDOMAIN is also diagnostic of a "does not exist" result.

A second case that could arise would be when the company nameserver does return a value, but you can't reach that host. Suppose you lookup the nameservers for domain2.example.com and get:

That seems promising! Now we know who to ask to resolve hostnames in domain2. But if this happens:

then you may have a firewall blocking you, or a router that doesn't know how to reach that subnet.

Because it is a hierarchical database that is searched recursively, DNS can fail if any one single level fails. The key to troubleshooting the inability to resolve DNS queries is to start at the top and work down until you find the last level that is resolving queries correctly. It is probably at the next level then, the referral records returned by the last known good nameserver, where the problem lies.

DNS queries can fail for a variety of reasons. Some of the most common are because an IP number in the zonefile is wrong; or because an IP is unreachable from your network (whether from a firewall or an unknown route, or any of several types of network faults); or because a low-level nameserver that is referenced by a high-level nameserver isn't correctly configured to answer the query.

Not the answer you're looking for? Browse other questions tagged domain-name-system bind subdomain internal-dns or ask your own question.