How to show instance names in CloudWatch graph labels?

We have a couple of machines in AWS EC2 and are running the Amazon CloudWatch Agent on them to collect metrics. Instead of the default ImageId, InstanceId, InstanceType triplet, the agent is configured to aggregate by InstanceId only:

In CloudWatch we can then use a SEARCH query to produce a graph: 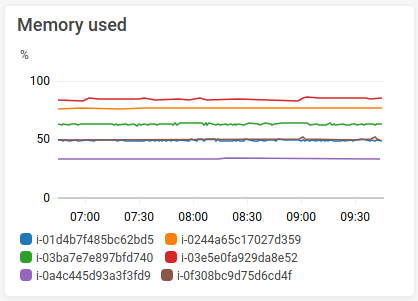 I would really like to see our hand-picked, artisanal instance names here, instead of Amazon's industrial mass-produced instance IDs. I've read about dynamic labels but they don't seem to be a solution.

Is there a way to make instance names show up reliably – either next to the instance ID or all by themselves?

1
Cloudwatch alarms from Amazon AWS EC2 instance are always in UT, how can I change the alarm time zone to Eastern?
13
Cloudwatch mon-put-instance-data not reporting on AMI-cloned instance
4
what is "period" column represent in AWS cloudwatch metric graph?
0
How to manage AWS CloudWatch per-instance alarms for instances created with Auto Scaling?
0
CloudWatch Alarm doesn't show Auto Scaling Groups
0
CloudWatch InSights: how to extract/query json object array
0
How do you get a metric of cloudwatch log group size?