One of the buildings I support recently had an adventure with a broken fire sprinkler. Lots of water everywhere.

One of the "drains" the water used was the vertical risers between network closets. The cable plant in this building has bundles of cat5e as well as conduit with bundles of multimode fiber optic cables. The fiber is standard multi strand plenum rated stuff that terminates in boxes that have the patches to the switches.

As far as I can tell, no water got near the ends of the cables (fiber or copper) but the conduit was saturated, and is likely still saturated because there isn't any air flow to dry the cables out.

My gut reaction is that while it didn't do the cables any favors, it likely also isn't going to cause any problems. A little more reading / googling around leads me to believe that the water may cause problems down the road.

Some pretty pictures so everyone knows what I'm talking about: 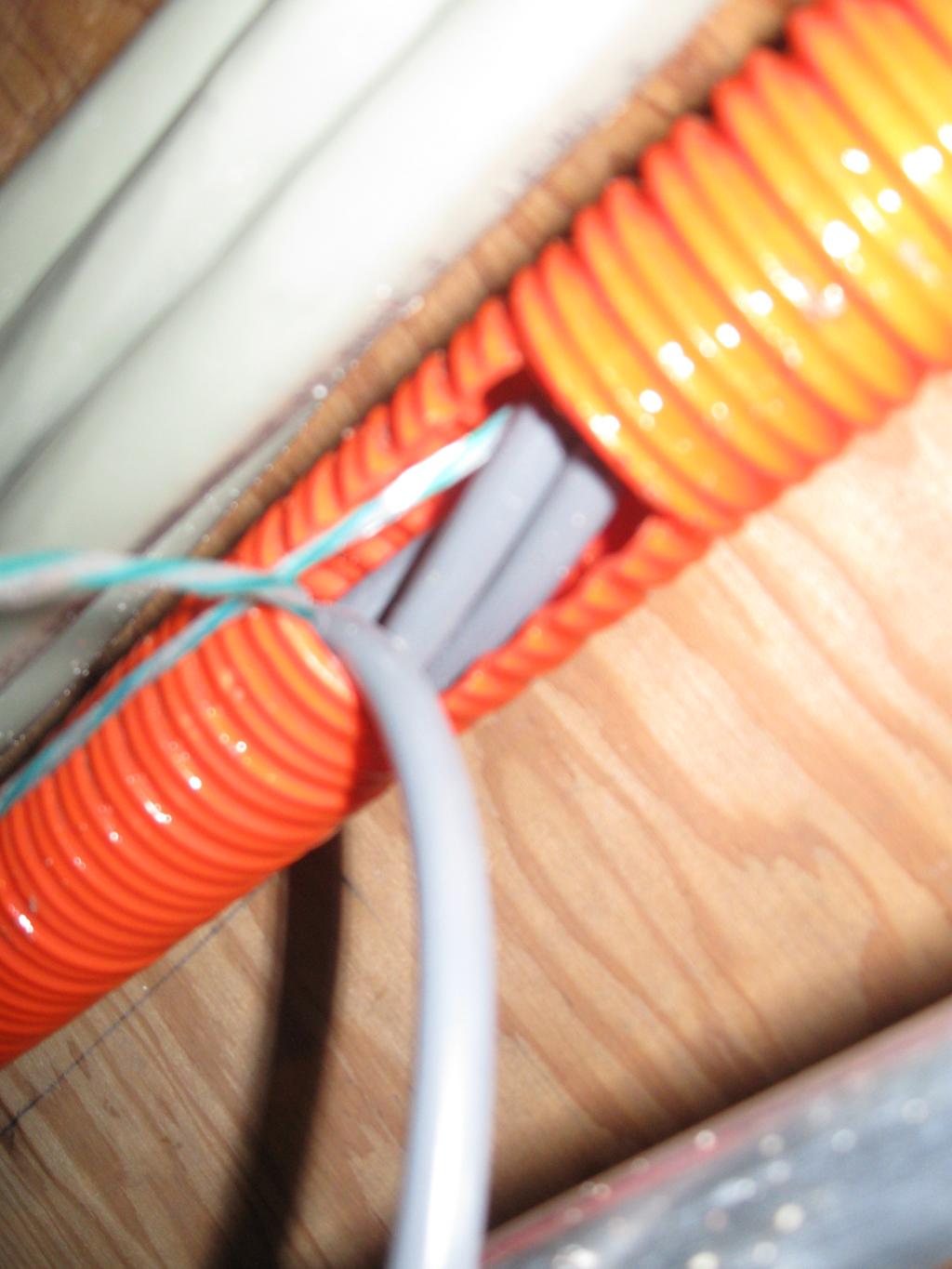 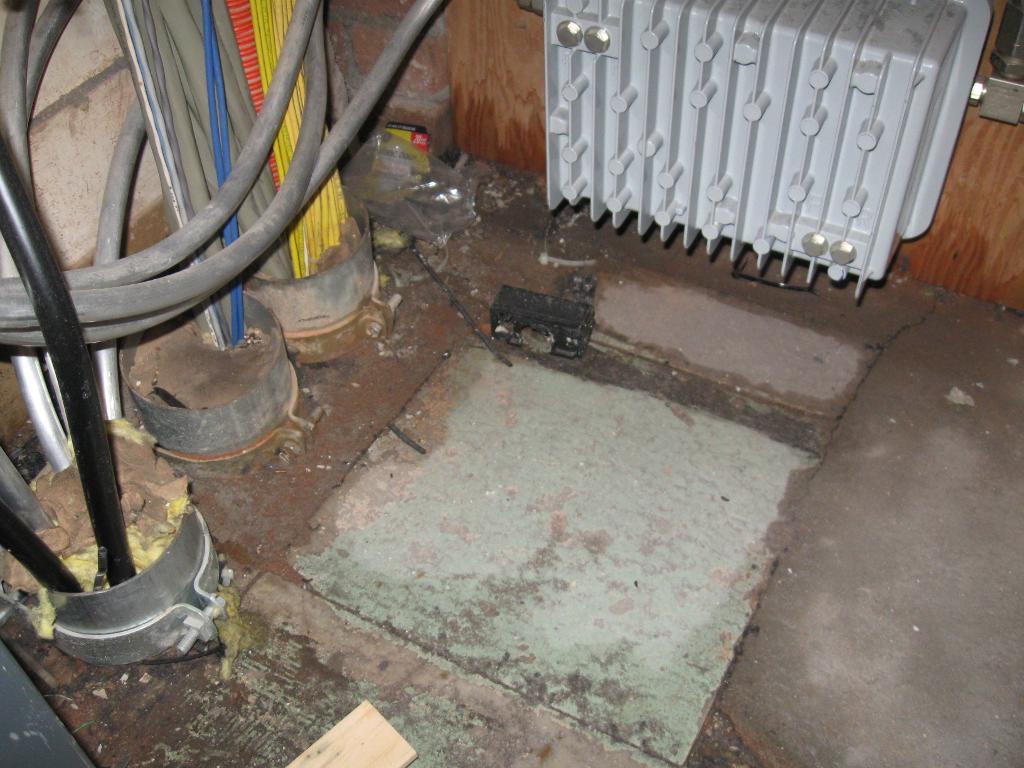 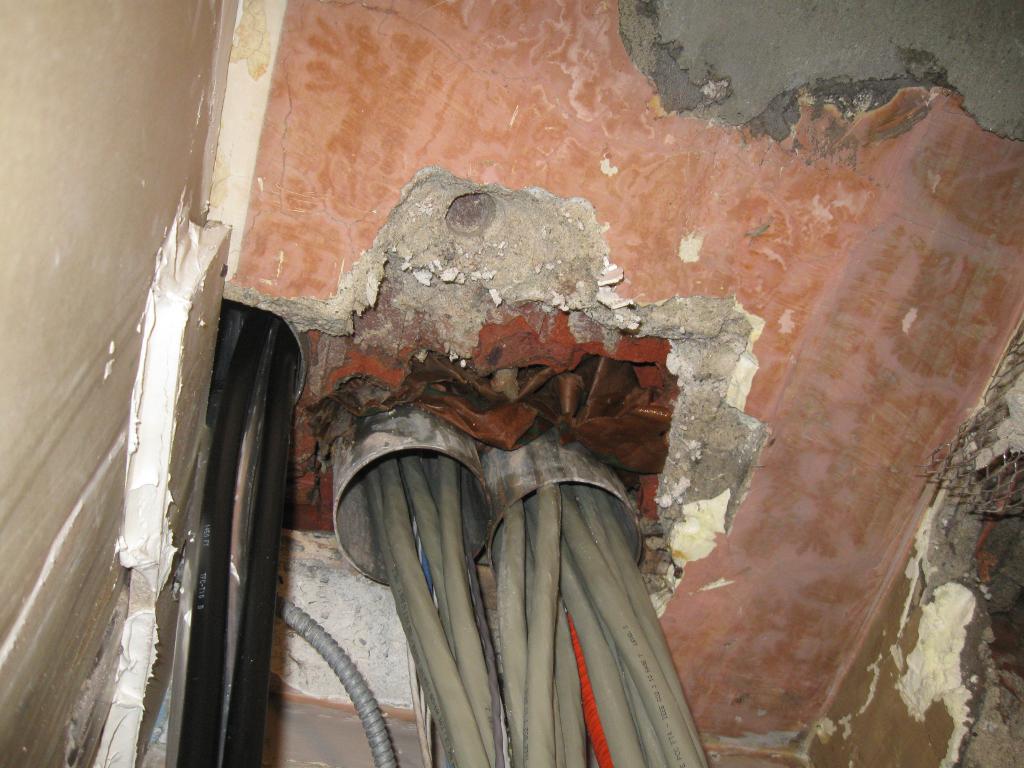 Does anyone have any experience with this sort of damage and how to deal with it? Should we just ask the insurance adjuster to add "pull new structured cable" to the list of things to be replaced?

And, if the opinion is "replace it because it'll start failing randomly over time" please include links that describe the specific failure modes, so I've got some ammo to use with the adjuster.

The real danger is at the terminations, where corrosion can start. As for the cables themselves, they're fine in water, although I'd be careful using it in a corrosive solution. Keep an eye open and you should see plenty of examples of network cables, including fibre, used outdoors in the weather. I know of examples where cables sit permanently in water and have done so for many years. Network cabling is no different to any other kind of electric cabling. Keep the ends dry and the rest doesn't matter.

Replacing the bundles would be expensive. If you've got it in your budget (or insurance will pay for it), do it.

As long as there were no nicks in the PVC sheathing, you should be alright (http://www.cat-5-cable-company.com/faq-bury-burial-cat-5-cable.html).

It's hard to tell if you had any nicks in the plastic, but I imagine that you're going to find out. Do you have any spare cables in the bundles? I would save yourself the time of panicking during an emergency and find and label them now. Create documentation on how to replace a poorly performing cable with a spare.

Know that if you don't rerun the cables, this event is going to be the scape-goat for all future network performance issues forever, until more cables are run.

I don't think the water will have any immediate effect as long as the water never entered the cables--obviously copper wiring will oxidize if given the chance.

My argument for re-running the cable would partly be that you can't reasonably ensure the current cable will dry instead of growing mold/mildew and turning into a slimy nasty mess.

Effect on Electrical Performance The ingress of water into the data cabling system can have a serious affect on its ability to support high bit rate data applications like Fast Ethernet and Gigabit Ethernet. In some cases, cables that are already near the link length limit (and therefore the attenuation budget) for the standard may fail after flooding. This is because when the cable gets wet, its dielectric performance is changed, which affects impedance and the related parameters of attenuation and return loss.

Cable Construction and Water Ingress It is a common misunderstanding that PVC, the material used to coat standard data cable, is waterproof. It is not; it is hygroscopic. Standard Category 5e and Category 6 cables have a PVC coating and are designed for indoor use and are not suitable for use in wet conditions.

Cables designed for use outdoors, where moisture or water is present in any quantity, incorporate waterproofing measures such as barrier tapes and gel filling, which are costly and sometimes degrade electrical performance. It is also worth noting that many of these waterproofing gels are petroleum based and are therefore unsuitable for use indoors (other than to a demarcation point), as they represent a fire risk. Indeed, the distance such cables can be run within a building is usually limited by national standards.

Severity of Exposure The effect of water ingress is also dependent on where the water has been and for how long. Short-term exposure to the middle of a PVC cable run, with a small quantity of clean water, is unlikely to have any long-term deleterious effect. On the other hand, if LSOH cables lying directly on a concrete floor slab, with no containment or protection, are submerged for a week, then the risk of damage is much greater. Water containing dissolved contaminants from, for instance, a dusty screed floor, also represents a greater risk.

An even greater threat than the effects of water ingress through the cable sheath is posed by the open end of a cable being exposed to water. The tightly twisted pairs inside a data cable encourage a capillary action that can draw water significant distances into the cable, destroying the electrical characteristics. Cable affected in this way will nearly always have to be replaced.

Depends on the conditions of the cables, where it got in ect, for example there would need to be openings in the insulation on the cat5 to do any major damage.

Since the passages are poorly ventilated apparently, there also comes into question a health risk with the growth of fungus and moulds.

I think to be quite honest cat 5e is not waterproof, hence why you have the option of using "exterior" grade cat5e..... I was always lead to believe that 5e was to be kept as dry as possible.... ok, the odd bit of moisture here and there is by no means going to have a serious effect on the stability of the cable within the PVC sheath. But 5e should be used indoors!

I would be more concerned about where the closets are located in the building and how well ventilated they are. Damp, poorly ventilated closets are a great place for mold to form. Mold is far worse of a threat than bad cables.

My recommendation to you is to get a public adjuster who has expertise in commercial fire and water-damage claims. It is going to be difficult for you as an IT person to establish that the cables are damaged or will fail over time. A public adjuster who does this for a living for people with insurance claims (vs. insurance companies trying to limit claims) will usually lead to a better outcome for you.

Water can affect fiber optic cables and splices if the water freezes, causing a macro-bend, which creates optical power loss.

Not the answer you're looking for? Browse other questions tagged fiber or ask your own question.