What's the deal with Deno? We talk with a major contributor to find out. Listen now.

all my ntpd servers marked falsetick, why?

I have a set of four ntpd servers that sync time from the same stratum 1 server. But on some clients they all are marked falsetick, why?

They recover from time to time, but why does it happen at all? Also another question is why do I have such a big offset? I tried to leave only 1 ntp server, but offset doesn't go down anyway.

I am runing CentOS 7 and all servers are in the same network.

Update #1 After removing LOCL (Thanks to @John Mahowald), I am still getting my servers marked as falsetick:

Undisciplined Local Clock (refid LOCL) should not be used. Remove it.

The Undisciplined Local Clock should generally no longer be used.

It was originally designed to be used when an ntpd must be able to serve time to others even when no real time sources are reachable.

The Undisciplined Local Clock is not a back-up for leaf-node (i.e. client only) ntpd instance.

In theory, if a NTP server had a good oscillator it can serve tolerably accurate time without any other sources.

It falls down because the clocks on most computers have rubbish accuracy compared to sources including the NTP Pool. However, LOCL has 0 delay, usually low delay means low error. So the likely good NTP sources you want to use are thrown out by the intersection algorithm because none are close to the low delay one. Except the local clock isn't the accurate one...

460 ms offset is a few days of drift on many systems. It could be lower, but selection problems happened when LOCL was introduced. Also, it takes many hours to discipline a large offset without stepping.

After you removed LOCL, you still have outliers by the intersection algorithm.

Despite all using refid clock.nyc.he.net, and all being 0.2 ms away, your NTP servers are still at maximum 400 ms offset from each other. That is terrible performance, many standard deviations given the expected error.

Rolling restart the ntp service on your servers. Or otherwise force a step correction.

Also investigate what your NTP servers are hosted on. They should be lightly loaded, running very little but ntpd (or chronyd). VMs are acceptable, but you need to be sure the physical hosts are syncing to the same time service. As host time sync is a thing.

As John Mahowald's comment indicated, your remote servers have no agreement between them. Here's a visualisation of the offset and delay values: 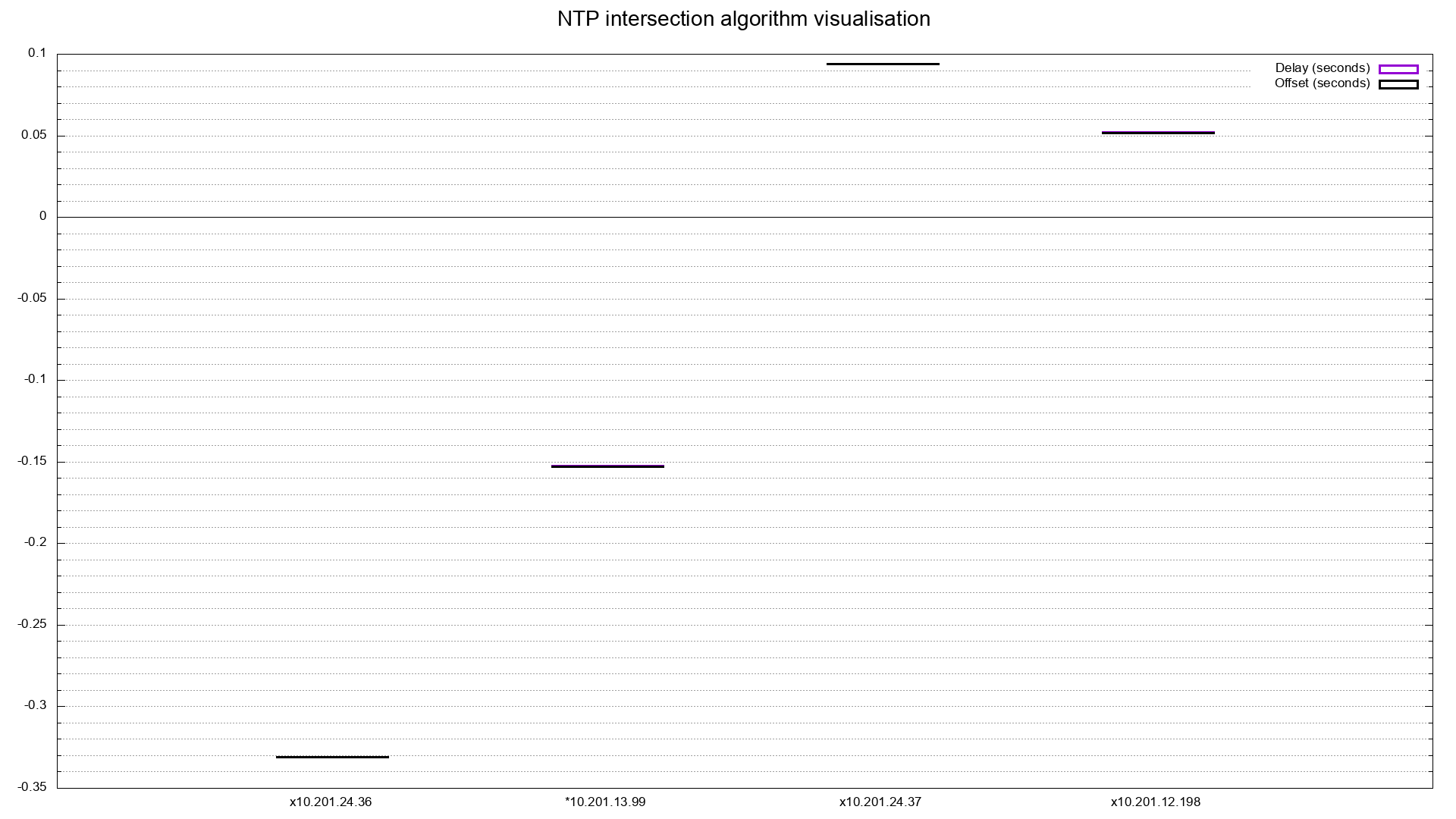 The black horizontal bars are the estimated time of the remote server, and they should have some purple-ish bars around them showing the possible ranges of time values which your remote servers could have. (The reason we don't see them in this graph is because you are within very close network proximity of your sources.) These ranges should overlap, but they don't in the case of your sources.

Here's an example visualisation of a working NTP setup: 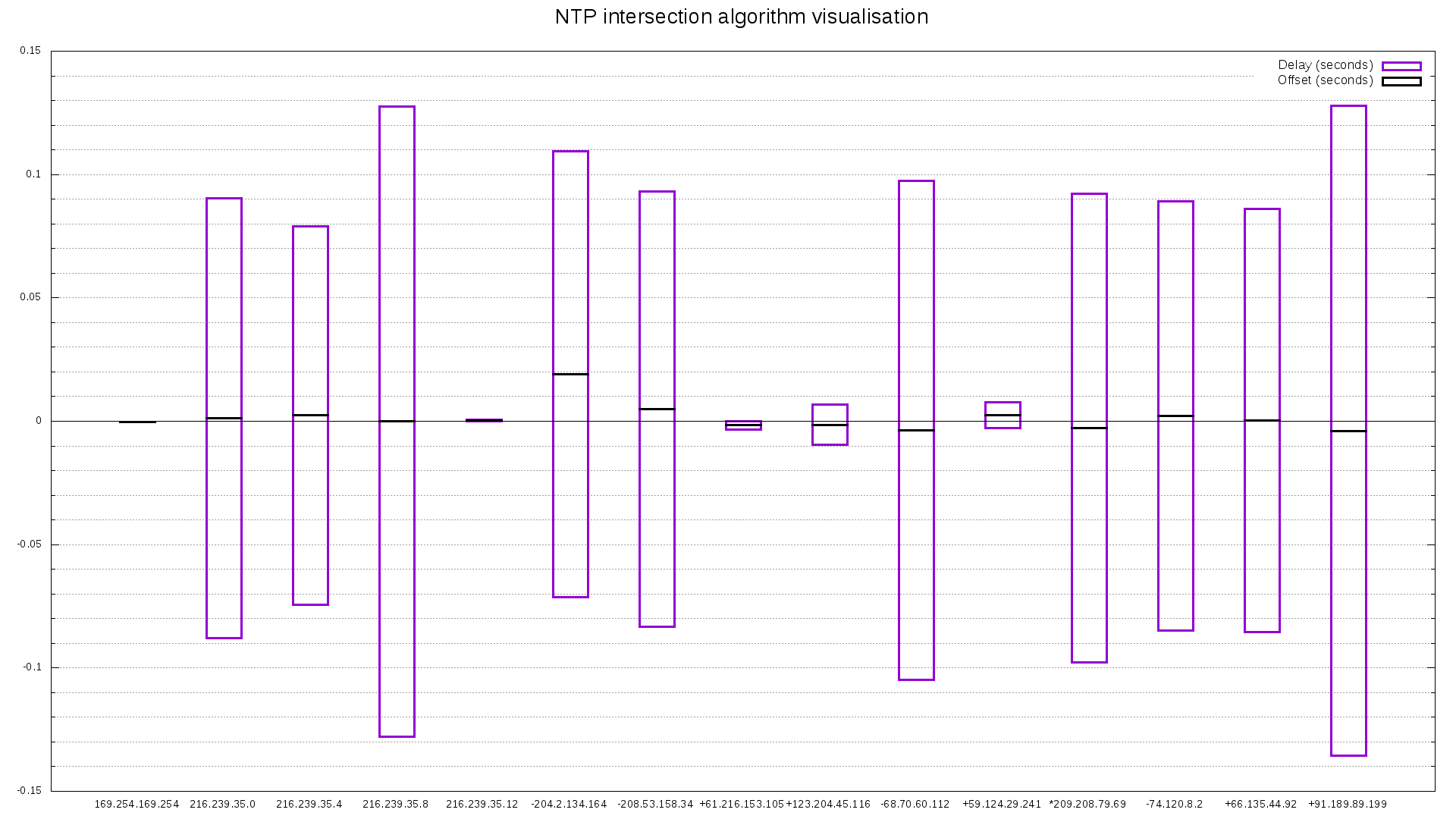 As you can see, the second example has all of the centre lines close together (and close to zero offset), and a large range of overlap.

So the summary is: your time sources are serving inaccurate time, and NTP rightly doesn't trust them.

Not the answer you're looking for? Browse other questions tagged ntp ntpd or ask your own question.